Skeletons and Mummies . . . and Laura performing! 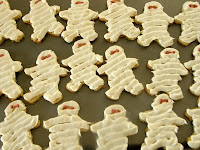 I used to think that gingerbread cookies were just for Christmas. Not anymore! I found these on TasteSpotting.com and thought they were cute.

On a completely different note, tonight at Common Grounds in Waco, Laura and one of her roommates are going to be performing. It's at 10:30 pm, but for some of you that is not late. Unfortunately I will not be able to be there - but wish I could! Break a leg, Laura!
In case you're interested - as I was - about where that 'break a leg' expression came from I just did a google search - and found there are MANY answers. Here's one (copied and pasted from the all knowing Wikipedia):
In the United Kingdom, the most common idea about the origin of the expression comes from tradition. Historians know from the time of King James I and Shakespeare's King's Men that actors would, on occasion, receive tips on top of their salaries. Rather than receiving tips directly from the company or theatre, tipping was left to the audience . During the final bows or curtain call, audiences would throw money, usually coins, onto the stage depending on how well they enjoyed the performance. In some bad performances they would throw rotten vegetables, but in the good cases, money. Actors would then 'take a knee', effectively breaking their leg line, on stage and pick up the money. As a result, when a person wishes someone to 'break a leg' it refers to wishing them success in their performance so in the end they would have to kneel down and collect a welcoming tip. Theatre evolved and the tradition of tipping changed to one of throwing flowers on stage, as well as presenting flowers.


There you have it.
[I'm sure Laura wouldn't mind if you threw money.]

Thanks! I'll let you know how it goes