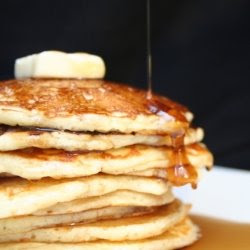 I just might have to serve breakfast for supper tomorrow night. mmm

Different note: Zero Church was great last night. There were 56 in the auditorium with several new faces! Sam did a wowy job with his magic show. And yet it wasn't too wowy. Just right.
The best part? Laura and her boyfriend, Ryan, drove up from Waco for it. AND Sam couldn't resist having Ryan be the one to almost have his head cut off by the guillotine. It was too funny. And, of course, scary. Thanks, Ryan, for being a good sport. 'Course as Sam said, the magician's daughter's boyfriend would be the one person in the audience who wouldn't say, 'No, let someone else do it.'
Me - I'm thinking, 'where was my camera?!!'
Anyway, it was all fun and then serious-- the message was great at the end -- well, right before the guillotine trick.

Thanks for you comment on my story, Nancy! I can't tell you what a relief it is to know someone thought it was at least good enough to want more. Schwew!!! You are right, I'll be posting a new section everyday. I'm almost finished with the section for today -- got a late start today, but it will be posted today before I go to bed. Probably before supper.

Speaking of supper and about the pancakes -- a tradition in our family on Sunday nights is to have breakfast for supper, and after seeing that photo, I think I'll make some pancakes instead of popovers. That picture made my mouth water.

Wonderful Zerochurch went so well. I plan ot come next week, but I already had a birthday party scheduled last night so I couldn't make it. Funny about Ryan and the guillotine. Good for Sam -- keeps everything in the right perspective when it comes to the lovely Laura Carmack!

And, YES!!!! I'm ready for the election to be over. OMG YES!!!! A long time ago there was a Christian comedian who started one of his routines by saying "It's Friday, but Sunday's comin'." Well, in the case of the election, I think we could all say, "It's Sunday, but Tuesday's comin'!" Thank goodness.

I'm glad we went! Even with the attempted decapitation. It was fun. Thanks for dinner