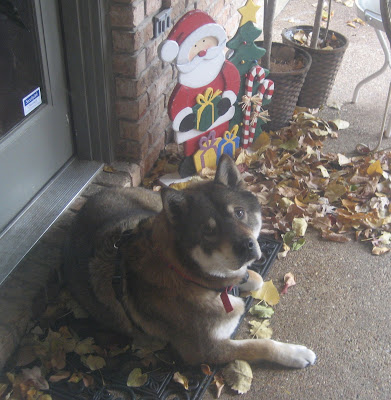 That's Shiloh telling me to sweep the porch.

We've been letting him in at night since it's been so cold. He's got a lot of fur and is supposed to be able to thrive in Alaska, but he's only known Texas weather so we've had some heart and have brought him in. I had thought about letting him be an indoor dog again, but when he started scratching himself on that white sofa it was time to show him the door. (I know, to some of you sofas shouldn't trump dogs.)
- December 11, 2008

And in this instance, sofas totally trump dogs because sofas are much more difficult to put outside.

Poor doggies, mine is out there herding the leaves. I get tired of being herded myself.

Besides getting tired of being herded and an occasional bit of text Cali slips into my manuscripts with a casually placed paw upon my keyboard which in dog speak means she wants a belly rub, she likes to leave nose prints on the underside of my glass topped coffee table. It's most inconvenient to clean.

I finally posted something. You'll enjoy it -- it's a chicken cartoon, and chickens are always funny. It was either that or whine about my week and that's a complete waste of life energy.