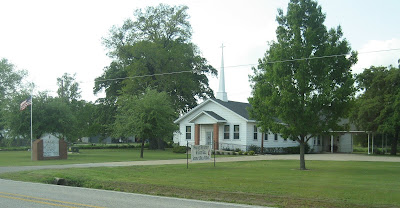 Saturday Mother and I went to Canton to spend the night, so as to go to Colfax Homecoming the next day. The last Sunday in August is always Homecoming. It's not a football game ... but a church service at the church where I was married - and across from the cemetery where my dad, twin sister, and all my dad's relatives that have died are buried. And it's down the road from "White Haven", the old home site of the Will White clan - and where my folks lived after they moved away from MY 'hometown', beloved Mission, Texas. (I had to put my plug in for Mission. -- Go Eagles!)

The church was packed with folks coming 'home' to their roots. Lots of memories were shared, like how my great grandfather, Will White, would come to church in his horse-drawn wagon, long after most folks had cars. Every time we go to Homecoming the old-timers talk about that... and point to where he would park that wagon.

Here's the window dedicated to my great grandparents... 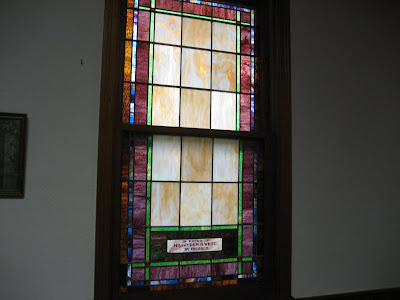 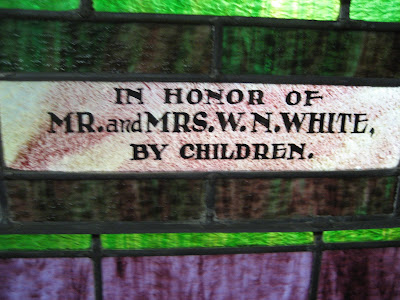 After the service we had a covered dish lunch... with the best homecookin' you can imagine. (That meant an Ultra Slimfast Bar today, of course.)

Anyway, Mother did the memorial part of the service. She read some poems, and scripture- and then listed those who had died in the past year. The man sitting next to her was so impressed that he wanted a copy of one of the poems, so as to be read at his funeral someday. After she did her part I sang and played a medley of "Fill My Cup, Lord", "I'd Rather Have Jesus", and "It Is No Secret." I wanted to do some old songs... since the whole morning was about remembering. Anyway, it was fun. Oh, and the sermon was given by my second cousin-once-removed, Buddy Matthews. Very good sermon. And good day all around.

I drove through Canton a few weeks ago. I'll have to stop sometime. You always tell such interesting stories about your heritage -- that's neat.

Wow! I knew you guys were going to the homecoming service but I didn't know you guys were so involved in the proceedings! That's really neat. We have a neat family