Will, Bailey, Laura, Ryan and I did the music at Bear Valley!
For the feature music it was the four of them doing Will's song to Bailey, "If I Were A Fishy". I loved it. (Sam introduced it by saying that almost all love songs can be - somehow - love songs to or about God as well.)

Here they are practicing (notice Will is playing the harmonica). . . 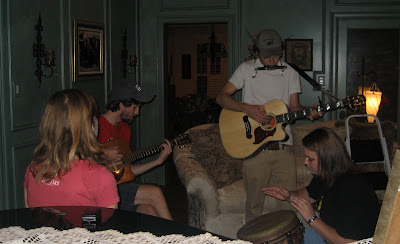 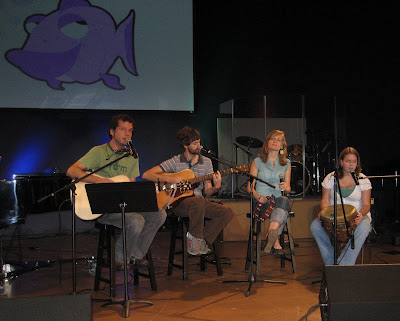 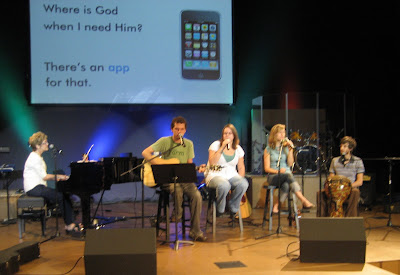 (Yes, somebody already called us "The Partridge Family".)
As for the four of them, they've tentatively called themselves "Red River Romance". That's because Will and Laura were born in Oklahoma and Bailey and Ryan were born in Texas. Clever, huh?

After the service Melissa Hatcher ran up and said, "Can Aubrey (Werner) play the piano?! I couldn't go to her recital and I have to hear her play." Was I glad! That way I (and several others) got to hear her play, too! She was SOOOO GOOD. She has the 'touch', as I told her mother. Some folks are just mechanical on the piano. Others have 'the touch'.
Here she is with her supporter, Madi . . . 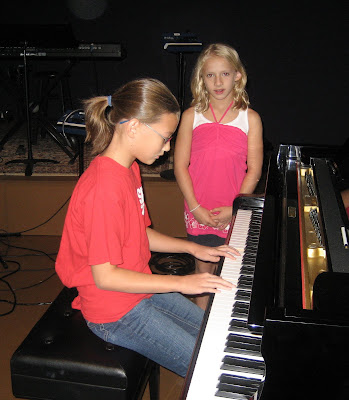 I bet you all had a blast! Wish I could have heard it. When are we going to Gloria's???

That looked like a lot of fun! I love playing or singing with our worship team.

Great pictures! Tonight I kept thinking that your house is so "make a joyful noise" and these pictures just confirm it!

Oh, what a sweet picture of my dear daughter and her friend. I am so glad you had your camera handy. I'm so glad you were able to hear Aubrey play and we do appreciate the sincere compliment. I pray that she takes it to heart. Peggy :-)