I went to play in the tea room the other day... 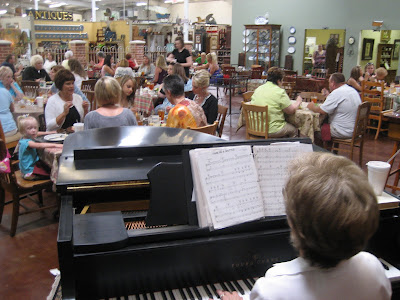 . . . and was so tired I told myself I would just play the easiest songs ever... and in between them just 'noodle' (you know, play chords and just nothing much.) (The above picture is an old one. I just wanted a visual aid to help you picture my situation.)
Well, that was the day I met little Alex . . . who had other plans for my relaxing background music.
Four-year-old Alex spent two hours letting me be her new best friend. She stayed by my side like she was glued there. Well, except for the ten minutes she was eating her little lunch plate, and even then, she brought her orange slice over to me so I could see how she could eat it. She also scratched my back, like she would do her mother's, she said. (Now that did feel good.) She rubbed my shoulders and then gave me the 'chop-chop' that masseuses often end with. She tried to scare me about 10 times - by creeping up behind me, saying, 'Boo!'. The first time worked. Telling her I didn't like being scared only made her more aggressive with her tries.
Oh and she told me all about her other best friends, Taylor and Madison. I felt as if I knew them.
All the while, I kept thinking, surely her mother is going to come save me from this precious bundle of energy.
I guess I should have been stern with her, and insisted she go back to the table, which was made up of about 10 women almost my age. I knew that would be boring, so I toughed it out. Plus, I'm bad at being stern with anybody.
Anyway, finally Alex and her group left. . . without a word of thanks for my babysitting. In fact, none of them said anything to me. One of them smiled, I think.

The next day my son, Will, and I were talking about the busy day in the tea room (he waits tables there 3 times a week). I mentioned the little girl that was climbing all around me for two hours. Will said, "Oh, those ladies asked me if the piano player minded if little Alex was with her all the time. I said, "Oh, that's fine. My mom, the piano player, really likes little kids."

Sooooo, I judged those ladies too harshly. They WERE thinking about me.

So there's my little vent.
My life must be sweet if that's what I have to vent about, huh?

And really, Alex WAS adorable.

LOL, what a funny story! Things aren't always what they seem, eh?

At least she gave you a shoulder rub.. ;)

Awww she was enthralled by you! You are mesmerizing!!! Just the other day, we were listening to Jim Brickman while having a snack and Caroline asked "is that Aunt Nancy's piano?"

And completely random, but the teenage girl at that table babysat for us!!!!!! She is now in college out of state, but that is the girl that we really liked!!!

Whoa, Elizabeth, that teenage girl babysat for you?! Small world!!!
(And nice comment.)

OH dear! My kids would have said the same thing about me. Things like that always happen when you're exhausted too. even if those women did think of you, I think they should have given you a nice tip at least.

When I taught flute lessons, Grant was a crawling baby, and he used to untie my students shoe laces, pull up on the music stand, etc. I figured if my students could learn to block him out, they could block out anything -- like judges, nerves, audiences, etc. I finally got smart and hired my first student to babysit Grant after her lesson while I taught the rest of my students.

Oh, I didn't know she was being that annoying. I wasn't watching. If I would have known, I would have said something to those ladies.