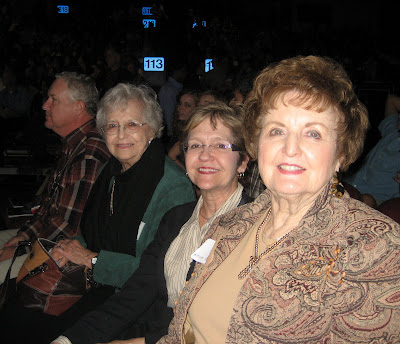 Well, of course we are! We (and almost 15,000 others) went to the Get Motivated seminar Monday at the Fort Worth Convention Center! It was GREAT. We got to hear live and in person Rudy Giuliani, Terry Bradshaw, Colin Powell (I didn't hear him, he spoke while I was parking), Zig Ziglar, and President George W. Bush (not in that order), and three others whom I didn't know. One of those three others whom I didn't know was Tamara Lowe. She was REALLY good. She and her husband run the thing, and I wasn't expecting much from her, in content anyway. I was wrong. In fact, I think she was the best speaker of the day.

Pres. Bush did a very good job. The news media said this was his first motivational speech...well, he succeeded: he motivated! Here's my picture of him... 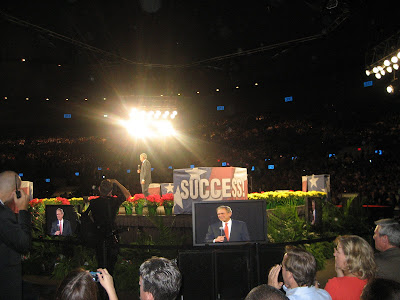 Here's my pic of Rudy Giuliani... 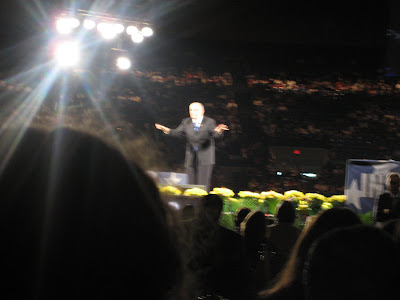 He was really good, also. (There's a reason I'm closer to him than to Bush, but that's a long story.)
I'd also elaborate on each speaker, but I'm not one much for long blog posts.
Well, I will say that Terry Bradshaw was just like he is on THE TONIGHT SHOW and Letterman: CRAZY! He WAS entertaining, but well, if there was an outline to his speech I don't think he used it. (Ah, but he is kind of lovable, I guess, and enthusiastic, for sure.)

In closing, I would say that the Fort Worth Convention Center needs to work on its parking. It was ATROCIOUS!! Either that or each one of those other 15,000 folks that went Monday brought his/her own car! (Notice my flat hair in the first picture - that's from walking eleven blocks with my raincoat on, with my hood tightly wrapped around my head. Mother and her dear friend, Dr. Nell Hoffman, have their hairdos in place, because I dropped them off at the door. That would have been TERRIBLE if they had had to walk all that way. (It did feel good to be the 'young one'.)

Well, I wished Sam and the staff could have gone. Some good folks did, though. Sitting behind us was the high school debate team from Lindale, TX.

Oh, did I say we had free VIP tickets?! Thanks, Steve!!

Email ThisBlogThis!Share to TwitterShare to FacebookShare to Pinterest
Labels: MotherMargaret

Sounds like a great time! My mom, Richard & I got to go see President Bush speak at the Idaho Center in Nampa, Idaho, in June, 2003. David went with us. He was about 3 weeks old.

No, wait, it was August, 2005. It was Nathaniel that came with us. David was at the sitter's. It all seems to run together sometimes!

AMAZING!!!! LOVE George W and I cannot believe you got to see him speak!!! Awesome. What an incredible lineup.

And I thought you looked really nice in that picture - I would never have thought you walked 11 blocks in the rain - that's awful! I bet your feet needed some warm socks and a massage after that!

How cool! We're trying to get GWB to speak at my charity gala... cross your fingers! :)

Thank you for attending Get Motivated and for blogging about it! I also appreciate your kind and encouraging remarks about my session. Thank you again!