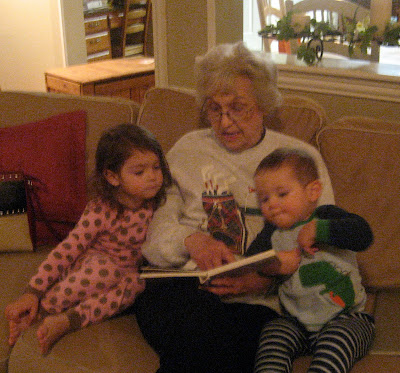 Mother and I were talking Friday night how absolutely wonderful it is that we live close to each other, and to all her grandchildren and great grandchildren.

That picture above was taken that very night.
As part of Elizabeth's birthday gift I offered to babysit Caroline and Andrew so John and Elizabeth could have a date night.
I was thrilled that Mother could join me!

----
On a different note, you probably thought that I was through with PRIDE AND PREJUDICE?
As with all obsessions, one doesn't get over them easily.

Why, just this past week I saw an article about P&P in this month's CHRISTIANITY TODAY, of all things.
My first thought: it's everywhere, it's everywhere!

That article addressed the fact that - in this Valentine month - regular guys just aren't Mr. Darcy. They're just not. (Click HERE for the article.) 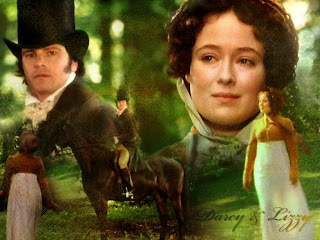 It made me think of the afternoon that Sam (and Will, Bailey and I) watched the 1995 PRIDE & PREJUDICE miniseries. We were (I was) engrossed in it. Mesmerized.
All of a sudden, out of the blue, just when Lizzy and her aunt and uncle were riding in a carriage close by to Pemberley, home of Mr. Darcy, Sam asked, "Do any of you (meaning Will, Bailey or me) happen to know when horses became domesticated?"

Ha! In the middle of that intriguing part of the story, he asked that.

I thought that was so funny.
And so Sam.

Ha! That is so Daddy. It reminds me of when I was telling Daddy about Ryan and my first date. I told him how we sat on the Waco dam and talked and talked while a lightning storm was going on (sans rain). I said it was really fun. Then he said something about how lightning effects the electrons in the air, giving you an euphoric feeling, and that he used to like to sit on the front porch during lightning storms.

Guess it was more than the electrons though!