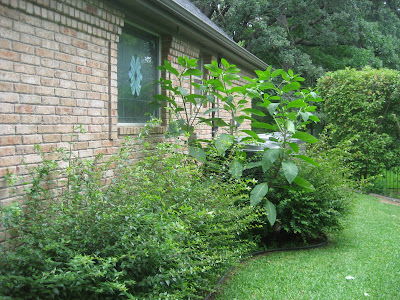 (Yes, that is the world record on poke weed growth.) 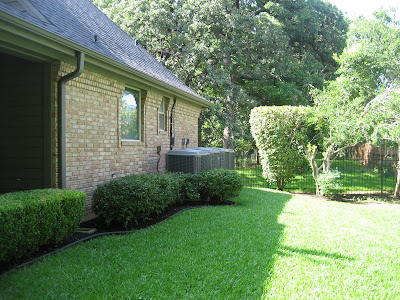 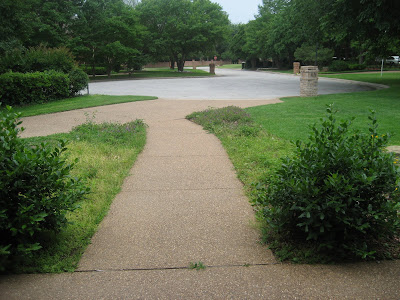 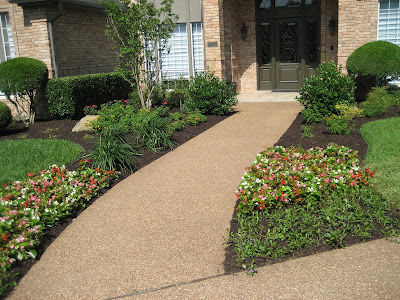 Note to self: when you're taking pictures for before and after shots - stand in the same place --- especially in the same direction. (Oops.)

-----
On a different note completely, I watched 24 last night, and thought it was great. Very satisfying.

I did not watch LOST, though, Sunday night. I quit watching after the 2nd season when I found out the writers didn't know where they were going. I said, 'Forgetaboutit.' It would be like if I found out my favorite mystery writer didn't know who-dun-it until the end of the book. I mean, the readers wouldn't know who'd dun it.... but the writer?
'Course I guess LOST wasn't a who-dun-it, but it WAS a mystery, don't you think?
I like mysteries being solved.
('Course I'm of the older generation.)

It seems weird talking about these shows in the past tense.
----
Well, that's my rant.
And my first extreme makeover.
----
I'll leave with a quote on marriage that I like (since weddings are on my mind).

"It is not a lack of love, but a lack of friendship that makes unhappy marriages."
- Friedrich Nietzsche

I also have 2 quotes on marriage in the sidebar that I like.

Email ThisBlogThis!Share to TwitterShare to FacebookShare to Pinterest
Labels: marriageadvice

Actually, they (LOST) did have a plan for the ending the whole time. They just weren't originally prepared to do it in six seasons. The original plan only called for four (I think). That's why there is so much character development in the third and fourth seasons. However, after watching the finale, I realize how important that character development ultimately was. The writers have said that this final season was how they always planned to end the show. Matthew Fox (Jack) confirmed that he was told how the show would end from the very beginning.

All that to say, you should give it another chance! I think it's better than anything that's ever been on television (with the possible exception of The Wire").

Rob, I think they just SAID they had a plan... so as appease folks like me. (Yes, I can be a cynic.)

I've not tried "The Wire", though I've heard it's good.

Right now I like 'Burn Notice', 'Criminal Minds', and of course those Seinfeld reruns.
Oh, and 'Forensic Files'!

I never got into Lost.