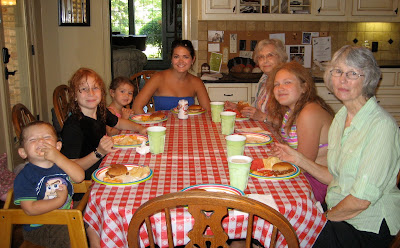 We had our dear friend Janet (the lady in the green blouse on the front right) and her granddaughters over for a swim and for lunch.

Janet's daughter, Erica, fell in love with a Russian young man years ago (they were both exchange students in each other's respective countries). They married and now live in Moscow with their two sweet girls, Leeza (Elisavieta, age 11) and Kate (Ekatarina, age 8)(spelling may be wrong).

While they were here I wanted little Caroline and Andrew to hear the Russian language so I asked Leeza and Kate to talk back and forth in Russian. They did. It was delightful. (Leeza and Kate speak both English and Russian fluently and without accents.)

In the summer of 2001 Mother and I went with Janet to Moscow to visit Erica, her husband Sergei, and little Leeza. (Erica was pregnant with Kate.) It was the trip of a lifetime.... and included a train ride to St. Petersburg.
Oh, and it was the hottest summer in Moscow in over 100 years.
(I guess you CAN take the weather with you.)

Anyway, we had a marvelous time those two weeks in Russia... and we try and see the family whenever they come to the States. This time we only saw the girls, but may get a glimpse of their parents soon (the girls came first).

So Monday they swam and had lunch with us, and Elizabeth, Caroline and Andrew. (The girls' mother, Erica, used to baby-sit Elizabeth when she was little.) (I hope you're following all of this.) 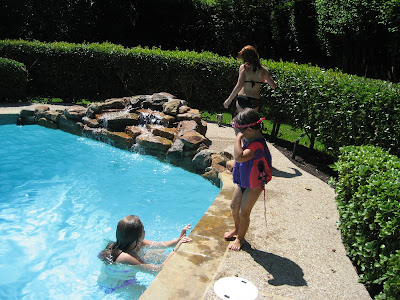 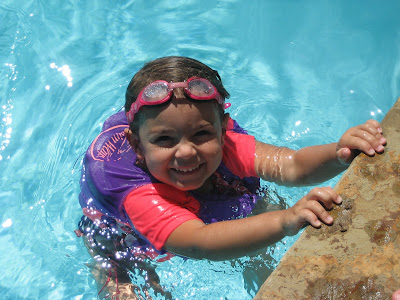 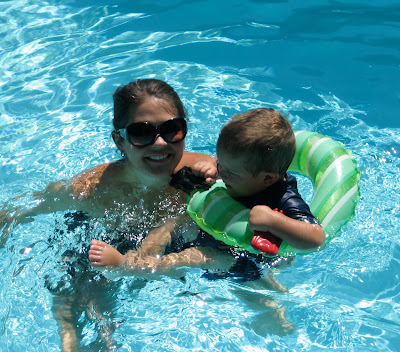 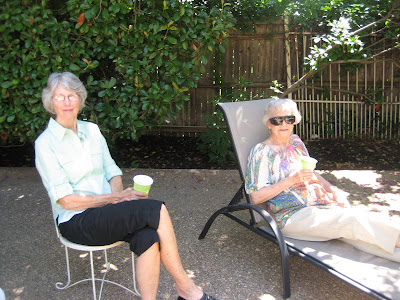 (Well, I didn't get enough pictures of Leeza and Kate. Rats.)
In the top photo they're the girls who look like they're 8 and 11.)

For now,
Есть великий день!
That's "Have a great day!" in Russian.

It was a great morning!! So wonderful to see them - thanks for setting it up!! And we had the rest of the sloppy joes for dinner that night - hit the spot!!

Wow, we had Russian too! Liz's friend, Mariya, was over at our house on Saturday and spoke Russian. Now, I must try Google Translate to figure out what Beth said!

Wow, Maria, you had Russian, too!
Small world!

And Beth, I thought someone just might write a comment in Russian... and if anybody, I thought it might be YOU!
And yes, I translated it. Interesting, about all those exchange students!

And Elizabeth, glad those sloppy joes hit the spot. They always hit MY spot!

Uh-oh, you know me too well, Nancy, I guess I'll have to change up my style -- keep you guessing. Perhaps I should have written it in Chinese???