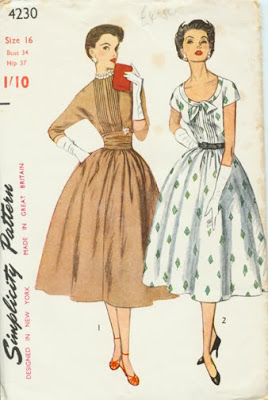 ... for dresses that Mrs. Norman (Melissa’s grandmother) would make for us.

We'd pick out the fabric, too.

We got to have our very own dresses... that no one else had.

And we'd wear them to school... everyday.

The year after we graduated (1970) they (the ones that came behind) could start wearing pants to school.

We had to wear dresses.

We didn't even balk at it.

We didn't know better.
----
Oh, and we didn't have a school cafeteria.

'Course there's this sign ... that I almost bought at LoneStar the other day.... 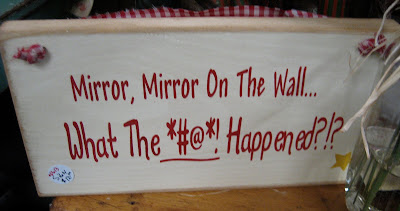 I love reading your nostalgic posts and visioning you and my mom doing these things!

And that sign is hilarious. I often think that when I look at an old swimsuit pageant pic, then look in the mirror! Ahh!

This was the best blog post of the day, maybe the week!

My mother made all my clothes up through Jr. High, and I could hardly wait to have a store bought dress. Little did I know how quickly store bought became shabby, and now I wish for clothes that fit that well and last that long.

We had to wear dresses too, and they measured the length with a dollar bill in the center of the knee and up the thigh-- any hem that was above the edge of the top of the dollar and you were sent home to change. We had a cafeteria, and lunches cost 5 cents for all you could eat. Imagine that!

that sign is a hoot! I laughed out loud and almost snorted water up my nose.

I love these posts! I would have loved having to wear dresses every day! I'm not a fan of pants. ;)

My mom made a lot of my clothes, and I tried too... but I wasn't as successful. I loved looking through patterns and imagining the possibilities though.

I agree with Eliz on the pageant pics and the mirrror... and thinking the same as the sign. ;)

I loved picking out patterns too w/ my mom! Of course the weren't all dresses but they were unlike anyone else's clothes. Sad to say I probably won't even be able to sew a button on for Eloise.