We had so much fun. Two days at Disney World.
We went to the Magic Kingdom, Epcot Center, and Hollywood Studios (formerly MGM Studios) each - both days!

Here are 2 pictures at Hollywood Studios... 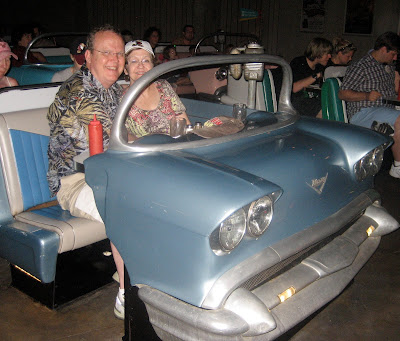 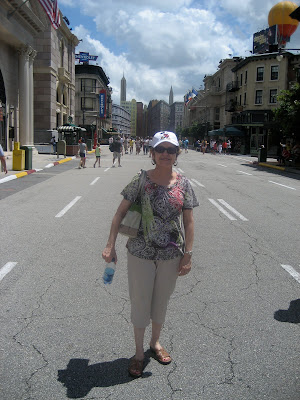 This was the first time I wore sandals instead of sneakers to a theme part...
... which led us to find out that the first aid stations at Disney World give out free band-aids.
(I have never appreciated band-aids so much.)

We ate at the Mexico restaurant in Epcot, and declared it some of the best tasting food we'd ever eaten. (We had remembered the atmosphere trumping the taste of the food. This time the food trumped.)

We saw the program at the Hall of Presidents in the Magic Kingdom, and afterwards Sam said they would have made Obama look more realistic if they'd had teleprompters in front of him.
Funny Sam.

When we told the taxi driver we needed to be taken to different terminals we then felt the need to explain that we WERE married... to each other.

Well, I've thought and thought and can't decide which part of the trip was my favorite.
It was all wonderful.

In closing I'll say this: We saw a lot of little girls dressed up as Snow White, Cinderella, Sleeping Beauty, the Little Mermaid, and others I forget.

When I'd see them I'd think of what Elizabeth put on Facebook recently about 3 1/2 year old Caroline.
It was this:


"Caroline's dinner time prayer: "Thank you, God, for my food  and family and that I'm a princess. And thank you for my purple dress  and that my friends are nice to me. (Long pause) and thank you that I'm  a ballerina. Amen."

How fun!!!! I'm glad you went on the spur-of-the-moment! That looks like a fun trip!

And yes, Caroline is so thankful for being a princess. She talks about how we're going to the Disney World Castle "tomorrow"... but that's actually going to be a year+ from now. :) I just can't break her heart by telling her that.

What a fun trip! Spur-of-the-moments can be the most fun. Glad you both went to DW.

How fun!! Definitely one of my most favorite places ever!
Glad y'all had a great time.

(and I totally was as dressed up like a princess as a 22-year-old can be at a place like that) It is magical :)

How FUN!! And spontaneous! We ALL need to just pop up and do something really fun and spontaneous every now and then. Keeps us young and in love :-D