I think tap water is fine... but whenever I buy water I always buy Ozarka...

On a different note: I've been working at Summer Spectacular at Fellowship of the Parks this week. I overheard someone calling it a Vacation Bible School on steroids. I can see why they'd say that.
It IS exciting.
And some of the parents of the school-age kids were telling me how much their children were looking forward to coming back the next night.
One lady couldn't believe her son woke up talking about it the next morning (after the first night) ... and even after he hurt his leg in the afternoon- and she thought he should stay home - he INSISTED he HAD to go back!

Speaking of FotP, my identity there is that of 'Rob's aunt'. He's preached several times, and as would be expected, has quite the following.
When I started meeting my fellow Summer Spectacular workers I mentioned I was Rob's aunt. "OH!!!! We love Rob!!"
One of them talked about eating at Fresco's because Rob talked about it in a sermon.
Another talked about how Rob talked about the birth of his baby, Sawyer.
They went on and on.
One said she wrote a note on the comment card on one of the Sundays he preached that Rob should have his own service every Sunday... that she and her husband would attend that service every Sunday.

So I'm the proud aunt.

Here's a picture I stole from Facebook... of Rob reading to his son.... 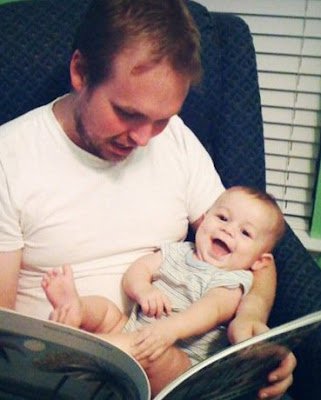 I love this whole post! :) I can only imagine how proud you are of Rob -- those are such great words to hear!

Drink lots of water and stay hydrated. It's hot out there, Aunt Nancy! :)

I am always "Rob's wife" so I know what you mean. He's pretty great, and of course we are completely unbiased in saying so, right? ;)

Thank you for lunch yesterday! That was nice to get out and have a lovely time listening to your lovely playing and eating lovely food :)

Thank you for the encouragement, Nancy! The folks at FOTP have been very kind to me. I'm really enjoying my time there.

I'm super proud of Rob too, Nancy. One of these days I'll be able to say "I knew him when he first started out as a youth pastor." Actually, from what you wrote, I guess I'd better start saying that NOW! LOL!

I love, love, love that photo of Rob and Sawyer. It's priceless -- and I am pretty sure why it's so good -- Caroline is such a good photographer.

Actually, I realy like all the photo's you've got up on your blog right now -- Cap, the Maxwells, Will and Bailey Jo -- and right by your little message about being so blessed. It all goes together so nice.