We had some tea room fun last Friday...

(from left: Victoria (Ryan's sister), me, Vicki (Ryan's mother), Laura (my daughter), and Ryan (Victoria's big brother and my son-in-law.)
-------
Here's Will, Bailey and Sam with Bailey's dad Dennis and stepmom Lita... out by the pool - thinking about the wedding. 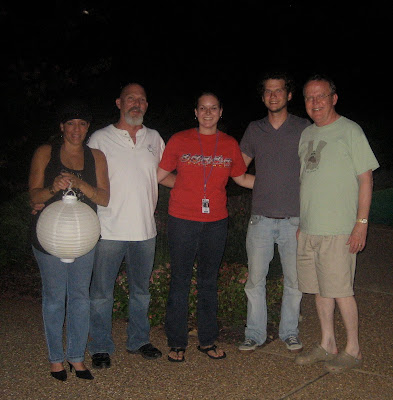 Here's a picture taken the other day when Will and I were babysitting Caroline and Andrew... 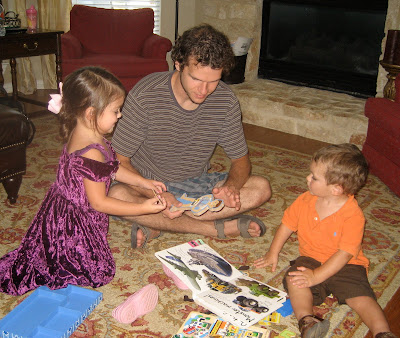 (I need to ask Andrew's parents what they're doing letting him wear orange.)
----------
And there's this:
"Spent 11 hours at work today but I sure am loving my job!!!!"
Those were Bailey's exact words on Facebook last night... after her second day of teaching.

And I may call Texas Country Reporter... to have him come out and do a story on this fella... 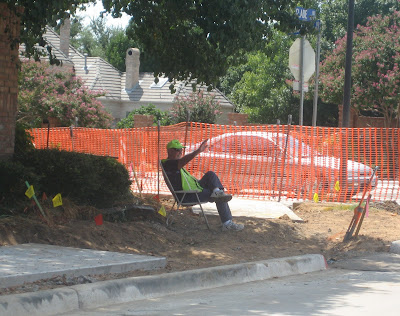 He waves at everybody!!

And he ALWAYS has a big smile.
ALWAYS.
Rain or Shine.
Cold or hot.

(I've thought many times about stopping and getting his name and just interviewing him...
... cuz I just love him.)
-----
From that picture you can tell there's roadwork going on -
A 'roundabout' is being built at that intersection.
(That makes me feel kind of British.)

Actually I think Colleyville has gone roadwork crazy.
Everywhere you turn it's there (not roundabouts, but other stuff).