Cats average 16 hours of sleep a day, more than any other mammal.

The average life span of a mosquito is two weeks.

You're more likely to be a target for mosquitoes if you consume bananas. 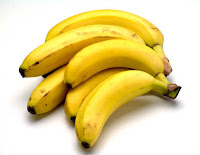 A cluster of bananas is called a hand and consists of 10 to 20 bananas, which are known as fingers.

The word 'banan' is Arabic for finger.

Bananas are available all year-round. They are harvested every day of the year.

Bananas are not grown commercially in the continental United States. They are grown in Latin and South America from countries like Costa Rica, Ecuador, Colombia, Honduras, Panama and Guatemala.

Banana plants are the largest plants on earth without a woody stem. They are actually giant herbs of the same family as lilies, orchids and palms.

Vanilla is the extract of fermented and dried pods of several species of orchids.

The pound cake got its name from the pound of butter it contained.

Chocolate syrup was used for blood in the famous 45 second shower scene in Alfred Hitchcock's movie, Psycho, which actually took 7 days to shoot.
----

I'm sharing this with my class tomorrow! :o)

Beautiful background! I didn't know the vanilla bean was from orchids! Love learning something new -- thanks!