... I had my own fall foliage tour! Some of the trees were gorgeous! I say 'some', because there were just a few. ... but they were absolutely gorgeous.
If I could take pictures while driving you'd see what I meant.

What else to tell you about?

Boy, does Sam need a day off. He has been so busy lately. What with his church work and his teaching he comes home really tired.

In closing I will tell you about yesterday.
I played in the tea room.
I played some patriotic songs - for Veterans Day - and a gentleman asked if I could play the theme songs for the different branches of the Armed Forces... like "Anchors Aweigh", "The Marines Hymn" ('From the halls of Montezuma....), and the song - don't know the title - that goes, 'Off we go into the wild blue yonder..' Also the Army song, "The Caisson Song" (which I totally didn't know... but he was sure I would if I heard it.).

Anyway, I can play some by ear... but I learned yesterday that I shouldn't try in public... with songs I just know 'the hook' to. 'The hook' means the part of the song with the title in it, usually. It's the memorable part of the song - and it's usually just a phrase - like "Anchors Aweigh -- something something".

I say all that to say that when in doubt DON'T (play what you don't know).
Fortunately it was only embarrassing for about 5 minutes.
-------
In closing here is a picture of Baby Anna the day she was born. She's with her mother, her grandmother, her great grandmother and her big sister.... 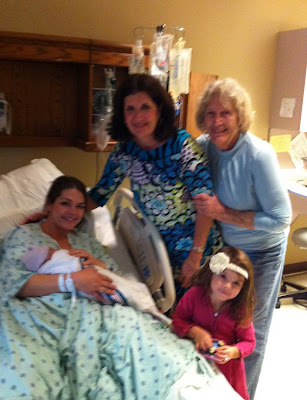