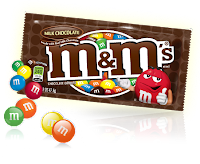 In M&M candies, the letters stand for Mars and Murrie, the developers of the candy in 1941.

The characters of Homer, Marge, Lisa, and Maggie were given the same first names as Simpsons' creator Matt Groening's real-life father, mother, and two sisters, while Bart was an anagram of the word 'brat'.

Finally, in Haltom City, Texas this past Saturday a group of 20 ladies came into a tea room for a party. When the waiter asked them if they were ready for menus the main lady said, "No thank you. We brought our own food."
I was there.
That happened.
I'm still dumfounded.

What? Really? Wow. Why would you bring your own food to a tea room??

As far as the Irish and their chocolate go -- I get it. European chocolate >>>>> American chocolate. :)

Just curious . . . did the owners/manager of the tea room MIND that this large group brought their own food??? Did they charge them a service charge??? Did they have advance warning that a group this size would be coming in and occupying that many tables/chairs and not purchasing lunch????? That would be a lot of lost revenue for a small business.

Very surprising! Now I am speechless!

Oh yes, the management/owners could NOT believe it. ... and only let them stay because one of the ladies was a friend's mother - or something. (that lady, I don't think, knew they were not going to order off the menu).

And yes, it was a reserved party ... which meant the cooks had ordered more food to prepare, the wait staff had set it all up.... ... and then served tea and water... ... and all of us chalked it up to "I-THOUGHT-I'D-SEEN-EVERYTHING" weirdness.

Jennifer, the owner, graciously gave the waiters more money than they at all expected from that group - (I'm not sure of the details on that).

How bizarre?!?! I cannot believe that! Did they at least ask them not to do that again?

Oh yes, Elizabeth... they asked them to never do that again, when they (management) reluctantly let them stay.

Yeah that was a really bizarre day.