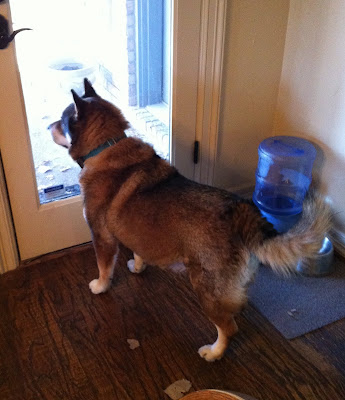 That's him looking out the door, watching Laura and Ryan's dog, Akon, running around outside.

Now here's Akon, looking at me in the door... 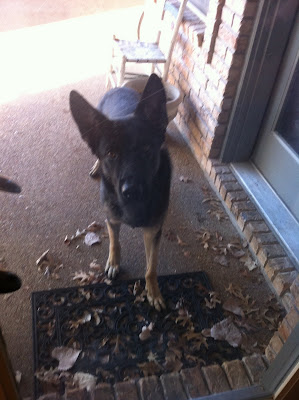 I was excited about the two dogs getting together. It would be like Uncle Shiloh meeting nephew Akon.

Well, Shiloh did not like it not one single bit.
We didn't know that until we let him out the door.
We should have had a leash on him.
What were we thinking? Obviously we weren't thinking.

He races out and chases Akon who is on a leash with Laura. Akon bolts, leaving Laura in the dust.

Then the unthinkable happens: Shiloh begins fighting with Akon and has him by the throat. Shiloh does not heed our screams, 'NO SHILOH! STOP!' So Sam and Will try and intercede..... then we see blood. Literal blood. Turns out Sam is the one bleeding. We had thought Akon was, but then we think Sam's blood got on him. Anyway, one of the dogs collar was what drew the blood, not Shiloh's teeth. 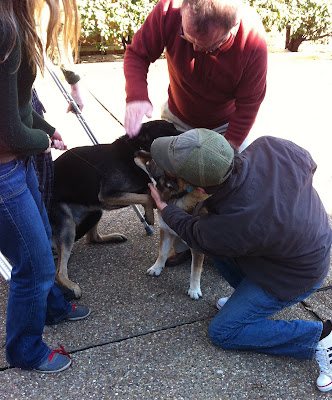 So what would have happened if we'd left the dogs on their own? I would have liked to have thought that Shiloh would have just proven that he was the Alpha Male, and then they would play together happily. But attempted murder was what I actually thought (think).

Anyway, all is well now. And I've settled down enough that I can write about it.

So Shiloh is just a dog, after all.

Well, that teaches me a lesson.  I'm just a human, after all.  He and I are both imperfect.   ...and we can still love each other.

--------
On a different note, I'm in bed with a major sore throat.
If your name is Amanda then now you know why I didn't come to your party. (I'll send you a message.)

(Obviously I feel well enough to blog.   Well, I've had this post ready for some time...... I was just waiting for the time to be right to break it to you that Shiloh is just an animal.)

(I know. I get silly on this blog-thing.)

Oh my, now that's quite a story! It had it all! drama, love, blood! And there you were filming! Get well sweet lady, we've got lunch this week! Love you!

Sorry you are under the weather. I told you to rest, but you didn't need to get sick to do it, LOL! Feel better soon!

Audrey is right -- you have the makings of a good story there.

Hahahahahahahaha...such a good story! Having 8 dogs....sometimes you just forget that after all...they are dogs....glad no one was seriously injured. Get well soon!!!

That was some story and sounds familiar. I always wonder how people, that rescue animals, get their pets to get along. I have two cats and the one that was at home first does not really like the other one. He will tolerate him, but when he has had enough, that's it. Hope you get to feeling better.

That's so scary - glad everyone (dog) made it out unscathed (mostly). My cousin had some issues with her dogs asserting dominance, too. :(

maybe shiloh is a vampire dog. and yeah he is just an animal but i still love him