In the waiting room...

I'm sitting in the waiting room at Harris Methodist Hospital in Bedford.
Sam's having sinus surgery.
No biggie - it's routine out-patient surgery.
But STILL.
He's my Sam.

He didn't want me blogging or facebooking about it until he was in it... which he is now.

And he doesn't want any company... and few phone calls.
(We are private people - even though I have a blog.)

Well, I'm anxious to talk to the surgeon. Every doctor that has seen his catscan and/or MRI has said that he had a super big need for surgery. Hopefully he'll have relief now.
--------------
On a lighter note, as soon as he feels up to it we're going to Grapevine Mills (outlet mall) where they have a new Lego Land Discovery Center. It's only the second one in the country.

We're all about Legos. I've stepped on many with my bare feet back when the kids were little.

AND we went to the Lego shop in Orlando years ago.
Here are Laura and I sitting with Lego-Man himself... 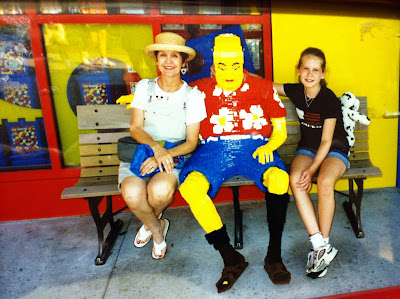 Oh my. Well, Nancy, I'm going to stop reading blogs and pray for Sam and you instead.

And I'll be waiting for an update.

I'm going to have to check out that Lego Discovery Center! We love Lego's too!

Here's hoping for a quick recovery for Sam... as well as some quick relief! Allergies are tough this year already!

Is the Lego land already up and running? I can't wait for the aquarium that's coming!

Now that is a sweet picture. Sam will be his old gregarious self in no time!!