If you do a Google search on “John Travolta”...

you may find my blog!! 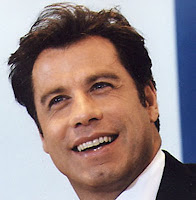 Well, I promised to talk about him and Scientology during this Holy Week.

Now I’m going to try.
(Note to self: don’t promise stuff you may not be able to deliver.)

Well, first of all, I think that famous actors - famous anybodies - are just folks.

And (most) folks are seeking meaning in life.

It seems that Travolta was introduced to Scientology way back in 1975. And that was a time he was looking for answers. He was given the L. Ron Hubbard book, DIANETICS.
It changed Travolta's life.

When I did a search to find out about the unusual aspects of the Church of Scientology I came across embarrassments: websites debunking the church by using ridicule, sarcasm, and just general disdain for any and all folks who are members.

Hubbard tried to offer them.

I don't know if he was well-meaning or not.
I do believe he was wrong.

And I believe (know) this: Hubbard's church started around the year I was born.... so it is young, right? Ha. --- Well, for a religious movement it is infantile.

What were Hubbard's claims? ---- besides the fact that he was false about his military career ... and his medical career. ???
Oh, well, he started out as a self-help guru. ... and he wrote a popular, intriguing book.

The person of Jesus Christ was written about by many, many folks - believers, nonbelievers, historians, etc., from over two thousand years ago, till the present.

Who verified L. Ronald Hubbard... and his 'auditing' system?

Where is its truth?

I think what is true is that God did some topsy-turvy stuff (in humans' view) by having his son be born in a lowly stable .... and then be executed as a common criminal.
Whoa. Who would have thought of that??

Oh, and then he came alive again... to save us from our sins, give us eternal life... and well, be the boss of our lives.
(Some of that is terminology that some of us have grown tired of - we've heard it ad nauseum. .... but we need to hear it again ... ANEW!!)

Easter is all about that.

Well, that may not have been the best post I could have written on the subject.

But do your own research.


"GOD CANNOT POSSIBLY BE A FIGMENT OF MY IMAGINATION, FOR GOD IS NOTHING LIKE I IMAGINED HIM TO BE.'"
-C.S. LEWIS

-----------
And here is a Bible passage I like (the first verse is perhaps the most common among believers - the second verse is not as common but VERY IMPORTANT (for those who think Christianity is just a big negative religion) ....


16 For God so loved the world that he gave his one and only Son, that whoever believes in him shall not perish but have eternal life.
17 For God did not send his Son into the world to condemn the world, but to save the world through him.
- John 3:16, 17

I liked the gentle way you handled this topic. Very nice. We are all just folks looking for meaning and purpose. I'm glad I've found that in Jesus.

Yes, I am always looking for my purpose in life, like so many others, Loved it, Nancy!!! Thanks.

Excellant post...you leave it to us to research....with only a few hints. I remember reading Hubbard's book back in the 70's. It didn't do anything for me. I saw it as another philosophy.