Why wouldn't the shrimp share his treasure?
Because he was a little shellfish.
__________
What do you call it when a dinosaur crashes his car?
Tyrannosaurus Wrecks
_________
My friend's carpooling buddy Ronnie always gets sick as they're driving through tunnels.
He went to the doctor and it turns out he has Carpool Tunnel Syndrome.
___________
I went to a bookstore and asked the saleswoman,  "Where's the self-help section?"
She said if she told me, it would defeat the purpose.
___________
Here are some actual quotes:
"Outside of the killings, Washington has one of the lowest crime rates in the country."
- Marion Barry, Mayor, Washington, D.C.

"I've never had major knee surgery on any other part of my body."
- Winston Bennett 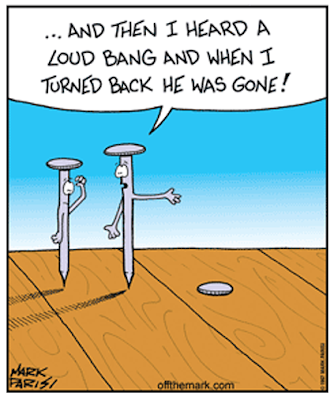 Thanks for the laughs, as always it is fun to visit your blog. I hope all is well with Sam's sinuses. Now that might be a good name for a blog...

Ha! My favorite is the cartoon