My throat still hurts, and well, I may need to get some medicine.

Well, at least I can.
At least medicine is plentiful here in the United States.

And at least the Germans, or the Japs, or the Viet Cong aren't shooting at me.

This Memorial Day weekend Sam and I have been having a war-movie marathon. I, actually, had never thoroughly watched (with interest) any war movie. Ah, but now I have!

SERGEANT YORK with Gary Cooper was great!
THE STORY OF GI JOE with Burgess Meredith was amazing.
There were others that inspired (like THE GREEN BERETS with John Wayne and David Janssen, RUN SILENT RUN DEEP with Clark Gable and Burt Lancaster, and A BRIDGE TOO FAR with lots and lots of stars (from Sean Connery to Anthony Hopkins to Gene Hackman to Robert Redford to Laurence Olivier to, well, more and more)).

Perhaps the most interesting, though, was BATTLEGROUND with Van Johnson. It was all about the Battle of the Bulge, and well, that was fascinating. 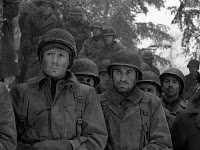 So I have had my lessons on wars in the 20th century. ... and they have made me so appreciative of our freedom. I don't EVER want to take that freedom for granted.
-----
On a different note, tomorrow Bailey's car window should be fixed.
Here's a picture of the hail damage from last week.... 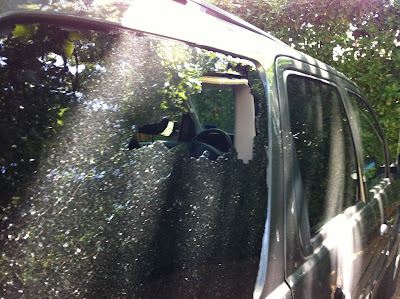 I had mentioned that it was major damage. Well, not MAJOR.... but still. For our Bailey Jo it was not incidental.

In light of those war movies, though, it seems, well, manageable.

After watching those war movies everything seems manageable.
- May 30, 2011

I can't believe you watched all those movies with Sam. Now that is true love for sure. It IS good to be free. No matter how upset I get with the current justice system, I still KNOW we live in the best country on this planet. Although I have been checking out real estate on a couple other planets.