It's going to be a good day today.

Then we had a wonderful Father's Day - eating steakburgers and hotdogs from Freddy's (Sam's request). Mm.

Where was my camera in all of that?

Would you believe the only photo I got this weekend was of something else.

I was in the kitchen and happened to look out the door... 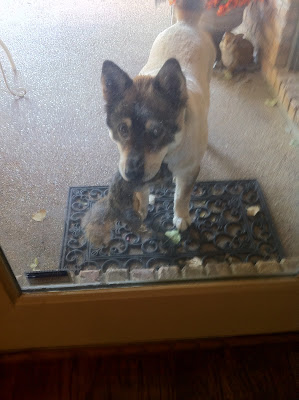 That's Shiloh presenting us with his 'present'.
There are other presents I'd like more than a dead squirrel.
I guess it's the thought that counts.
(You may notice that Shiloh has gotten his summer haircut.)
------
In different news, I went to see Laura and Ryan last week, and got this picture of them by their garden... 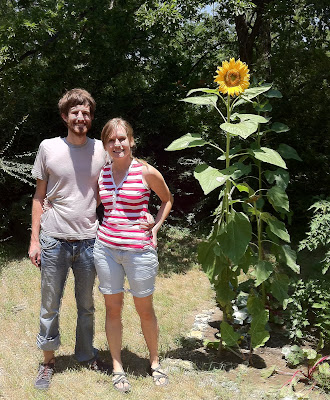 Their cucumbers were just getting started... 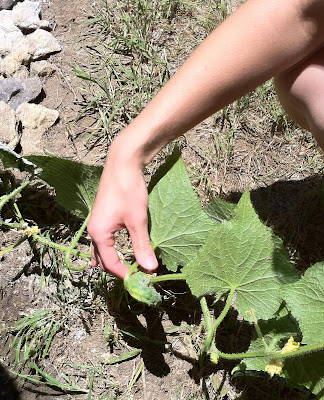 They also grow cayenne peppers, swiss chard, and tomatoes, that are having a hard time getting with the program.
--------
Well, this post shows that nothing earth-shattering is happening in the Carmack house.
That's a good thing.
--------
Oh, I forgot to tell you: Will and Bailey are in London!!! ... and nephew John is in Germany!!!
I guess there IS some exciting news, after all.
--------
In closing, here's a quote I read today...


"Mark it down. You will never go where God is not."
- Max Lucado


That is a 'duh' statement, but sometimes I need to hear it.

I do love the summer hair cut though - it's cute. Probably cooler, too.

I want to be in London. Or Germany! Or anywhere that isn't my desk. ;)

What a nice weekend - lots of celebrating, good food, and chilling time.