You see, we woke up to no electricity!

We went out to breakfast (McDonald's) because we had to have our coffee. (We like their coffee.)

Then a little later I went back to that same McDonald's just so I could get on the internet there. I thought, well, since I'll be using up space for a while I better order something to eat. So I had two McDonald's breakfasts this morning. (Where's that Lipitor?)
When I settled into the booth I found out my laptop was NOT charged ... and there were no outlets anywhere to charge it. That meant I did not get online for hours! (Carla thought I'd deserted her, I know!)

Well, now we finally have power - and feeling cool again.

The stuff in the fridge and freezer is questionable.

... But my devotional reading today with Carla told me not to complain about stuff.
Perfect timing, I'd say.

On a different note, yesterday was our 33rd wedding anniversary. (THANKS FOR ALL THE NOTES and 'LIKES' ON FACEBOOK!!!)
We had a great day!
We stayed home mostly but last night we went to a fun staff cookout.

Yesterday afternoon we decided to watch a movie made the year we got married (1978)... We chose THE BUDDY HOLLY STORY. It had been 33 years since we'd seen it.... and I think we enjoyed it even more than we did then. It was sad, though, because all the time we were watching it we knew the ending. Still, it was great. 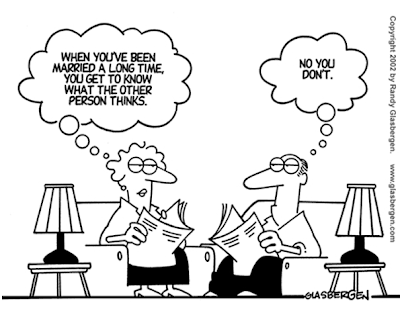 OMG, that cartoon is hilarious!

Sorry about the power outage. That is not fun. Thank goodness for McD's coffee it's good stuff, but too bad you were without the internet.

I'm still chuckling at the cartoon. That's a good one, and perfect for your anniversary.

Well, I must admit that I was thrown into a tailspin for a while! I start my day with our devotion time! I wasn't sure how to proceed!

I'm glad you got your power back!
And for the record, no matter the temp, you will always be "cool" in my eyes!!
Carla

Glad you got your electricity back!