I remember the summer of 1980. We were living in southwest Fort Worth, getting ready to move to Brazil. Sixty-nine days of over 100 degrees temperature were making us a little irritable.

Then we moved to Brazil. The first year we were near Sao Paulo, in language school. We got there in January, '81, wearing our winter clothes... and they were in the middle of (a gorgeous) summer.

The next January ('82) we moved north to our 'station', Teresina, Piaui (pronounced Pee A Wee). 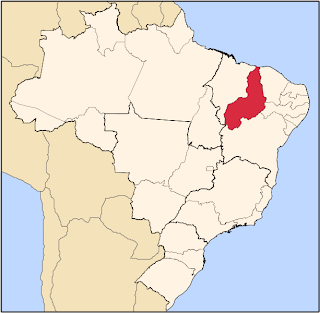 The red is the state of Piaui.
At that time Piaui was the poorest state in the nation... and the hottest. At least that's what we were told... and certainly believed.
There were two seasons: wet and dry.

One night the temperature actually got to 70 degrees. That's when the missionaries got out the hot chocolate.
Otherwise, we'd have fans blowing on us all the time.
Little makeup was worn, and certainly no hose on our legs.
(That made it weird when we moved back to Texas.)

I'm saying all this to say that this hot summer right now (this very minute) is taking me back to Piaui, in my mind.

When I saw that TIME magazine had a list of the hottest places on earth, I just knew Piaui would be one of them.
Hmm. I think they need to redo their list. Click HERE for that list/article.
--------

Well, I have other things to tell you about and show you: like a trip to Waco to visit Carla and Kenzie, and some pictures of sweet little Anna being held by Will, Laura and Nana, but they will have to wait.
When I saw that TIME list of hot places, well, I just had to tell you about Piaui, Brazil.
(I'll write more later on Brazil. Talk about a WONDERFUL country!)

These kinds of posts are my favorite! I love the stories of your past! Of course, I love the present day ones, too...!!!!

These stories make me realize... we have so little to complain about here.

After all, the AC is blowing on me right now. :)

But I'm a little tired of hearing about it no the news...

Ah, 1980- how well I remember that summer. The AC was broken on my car and I didn't have the money to get it fixed. Five seconds in the car and I was drenched in sweat. The thing abut 1980 that is different so far this year is that there were so many days where the temp reached 110° and higher then the heat index was above that. That was a scorcher! Glad I wasn't pregnant that summer!

Your time in Piaui must have been so interesting. I bet the heat and humidity was hard to adjust to, especially coming out of winter straight into a sauna.

I hope you will write more about your time in Brazil, about the ministry you did, things of interest you saw and what you learned from the experience. I think that would be so interesting to know.

Still remember that wonderful air conditioned deli in Piaui. Wish I had a digital picture of Marian laying on the floor in front of the fan in your apartment. Loved visiting there in spite of the heat!

YES!! Tell us more about Brazil. I haven't heard near enough!