Okay.
I've decided that for a while I'll keep that particular header thing up (that says in light green letters 'Welcome to Nancy's Nook').  I love it.  (If you need to know who those people are and just how I'm related to them you can ask.)  (One thing for sure: they're some of my most favorite people in the whole wide world.)

Having a header with photographs is fun... but I don't know when to stop.  Do I change it every time I blog?  Clearly I decided this time not to ... but what about next time?
You can see that blogging opens up a whole new set of decisions for a decision-making-challenged person such as myself.
----------
Now on to my next subject: Will's band!! EARLY MORNING CREATURES is their name. (That's kind of ironic since Will has never been known to be an 'early morning creature'. (I couldn't resist saying that.))

We went to Arlington Saturday night to watch him play.
It was a battle of the bands, but I just knew that EARLY MORNING CREATURES weren't going to win. It was a country band contest... and well, Will's band didn't even look country. (But, oh they looked and sounded GREAT.)

Here are some pictures.... 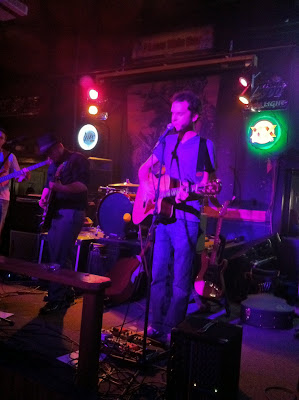 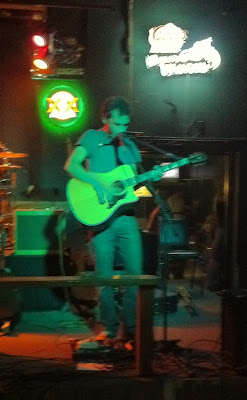 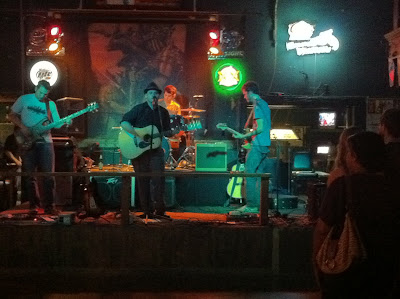 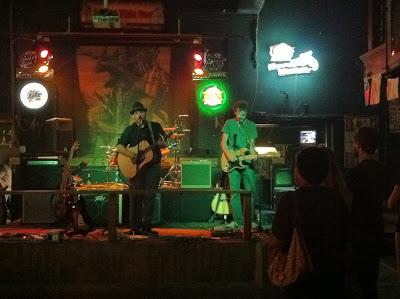 Did you notice that in one of those pictures Will is playing the harmonica while playing the guitar?!
Yes... so that was country!

Sam and I thought we'd be the old folks in the crowd at that place. Turns out we weren't.
It was a saloon (really) and 'old country' was the type of songs mostly played (I gathered from the clientele).
Ah, but the agent there that set up the battle of the bands happens to set up all kinds of battles (classic rock, etc.) ... and he asked EARLY MORNING CREATURES if they could play for him again. !!!!!
Also, one of the judges wanted them to play for him again, too!!!

Of course, Sam and I weren't surprised.

(You can 'like' them on facebook... just click HERE to go there.)
------
So as not to leave you without any Treasure Tuesday, here's a picture Sam got one day. It's one of his treasures for sure... 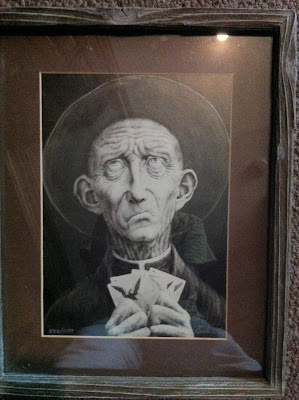 ------
My next post will probably be about my most interesting breakfast with my dear cousin Audrey...
...unless I wait on that -till just the right time - and decide on another topic.
(Decisions, decisions!!)
- September 13, 2011

Email ThisBlogThis!Share to TwitterShare to FacebookShare to Pinterest
Labels: Will

That poll is so hard!!!! I picked snorkeling but horseback riding was a close second... They are both so much fun!

I am not entirely sure about that picture? Either its the worst poker face or the best poker face? What a character!

As for Will, he takes right after you with his musical talent! How exciting to see your son on stage and successful. We never know how we will influence our kids, but surely we do.

You are still influencing me, watching your blog and all the creative fun you have has got me thinking I want to start another blog where I can play too and indulge in my creative side. See Nancy, you influence all of us in such a positive way.

As always, I love the Bible verse you have chosen for now. Thanks for bloggin'!