I LOVE music.  And Friday night I got to hear some GREAT music! 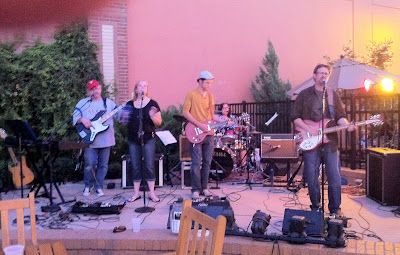 That's (from left) Keith, Susan (they're married), Will (my son), Jan (on drums) and Barris (who(m) I'll tell you about later).
They did a lot of great stuff... and there were no tables vacant! (And there were A LOT of tables!) 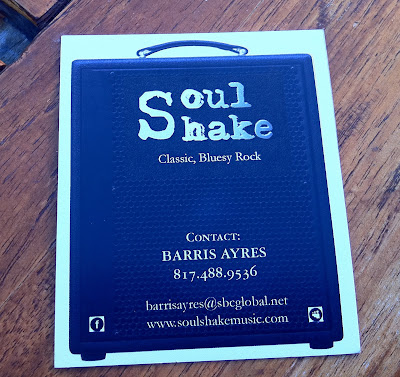 (This card is not as big as it looks. (I should have put my literal fingernail in this picture.) It's just a little bigger than a regular business card.)

About Barris: besides being a great musician, he is a licensed professional counselor with a Ph.D. He helped me IMMENSELY back in the mid-nineties when I was having major insomnia. He is a Christian counselor --- and I HIGHLY recommend him.) (Click HERE and HERE for sites about him.)
-----
On a different note, Will's other band,"Early Morning Creatures" is playing THIS Thursday night at THE AARDVARK in Fort Worth. Click HERE for the Facebook page on that - that will give you the needed info.
-----
In closing, here are some music quotes I like...

"After silence, that which comes nearest to expressing the inexpressible is music."
- Aldous Huxley

"I don't care much about music. What I like is sounds."
- Dizzy Gillespie

"I think music in itself is healing. It's an explosive expression of humanity. It's something we are all touched by. No matter what culture we're from, everyone loves music."
- Billy Joel

"I don't know anything about music. In my line you don't have to."
- Elvis Presley

They were GREAT on Friday!!! I'm so glad we came out, even for a few songs! Wonderful!

And I voted "piano" because I'm sooooo not musically inclined! That went to your kids!!

Yes, music is powerful. If I'm in a bad mood, turning on the right song and cheer me right up. It's also interesting how listening to music can so strongly trigger memories.

I hope I can catch the next soul shake show!

I do know YOU and you make great music. I hope some day I will see Will perform. I know it is special for you two to be able to share this gift. I sure wish the school system would spend more time developing these creative gifts...but look at Will, he excels anyway.