Think of your best friend growing up....

... whom you haven't seen in years....
and then imagine just running into her/him at a spot that isn't close to where either of you live.

That's what happened to me last Saturday in Canton!!!

Mother and I went to Canton Trades Day.

We walked into the "Marketplace" (up on the hill on Hwy 19) and went our separate ways. I walked half-way down an aisle, heard a familiar voice, and looked and saw... DIANE!!!!!!!!!!
I could hardly believe it. 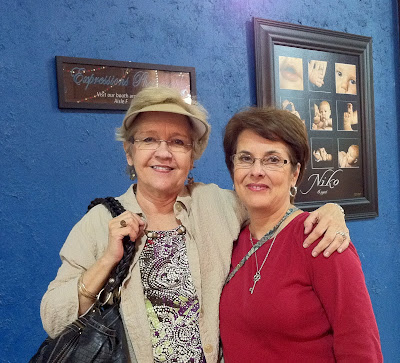 (Surely we both look better than that.)

Then, later, I took a picture of Mother with Diane... 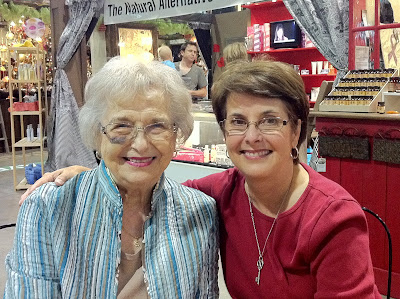 (You can tell Mother was happy, too.)

Over two and a half hours later we got back to shopping. (You can save a lot of money by sitting and talking instead of shopping.)
And we talked about EVERYTHING!
Well, I don't know who she's for in the presidential race... but I know all about her family, and her twin brother, Dennis.

You see, Peggy and I and Diane were all twins! Diane's twin happened to a boy, but we were twins... the three of us.
(Now Diane has identical twin granddaughters - who are 15!!)
And now Diane and I can tell people that WE'RE twins. (We don't have to add the part that we're not twins to each other.)

So I'm still having fun thinking about running into Diane!!!

Diane and I have only really been keeping up with each other with Christmas cards (if I get around to sending any).
But when we do get together we just take back up from where we left off years ago.... talking and talking and laughing and laughing, well, that's after we've screamed the excitement scream.

I may have to scream it again!!

Finally, I happened to find a 'friend cartoon' that might also pay tribute to dear Steve Jobs, who died yesterday. 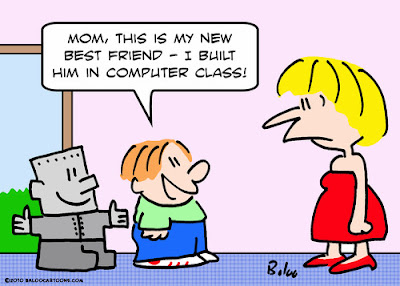 You do look alike. I wish my bff from way back and i looked alike...she's always been a beauty...oh,well..it is sooo nice catching up. Speaking of...we still haven't gotten to sit down and visit! and catch up! <3

How special! Diane and Dennis were so nice and so cute! They were our neighbors on Griffin Parkway. Isn't it great to have "run-ins" like that!

How exciting. What a great union for the two of you. Amazing how so many years can pass but its as if no time at all in your relationship. That is very special.