Years (decades) ago I had a date with the brother of a friend of mine. In the course of the evening he asked me how I could possibly believe there was a God who made the earth, what with all the planets and stars, and other galaxies out there.

I told him I didn't quite understand his question.
What difference does it make that there are so many planets and stars and other galaxies out there?
Do they negate an Almighty?
I think they AFFIRM an Almighty.

I said as much to him.
Then I was bracing for some more questions that I couldn't answer, or at least for an argument of some kind.

But he just looked at me and said, "I guess you're right. God could make those galaxies, too."

Wow. I thought. He must think I'm smart... and thank goodness we aren't going to debate the existence of God! Whew!
(We didn't date again, because I didn't really like him... but not because of that conversation.)

On a similar, yet different note, the other day I was listening to Dennis Prager on the radio (AM 660 - from 11-2 in the Metroplex area) and he was talking about God. Prager is Jewish and has taught Jewish and Russian History at Brooklyn College, among other things. Every week he has an Ultimate Issues hour and I'm thinking that was the hour I was listening.
Anyway, a caller called in and said that he just can't believe in a loving God.  Prager asked him why and the caller said, "An Almighty loving God would not have made where you breathe (the wind pipe (trachea)) so close to where you swallow food (the esophagus). A loving God would never had done such a dangerous thing to his creatures."
Prager said that was the first time he'd heard that objection to belief in God before.
(That was a first for me, too.)

What about you? Why do you think some folks don't believe there's a God? 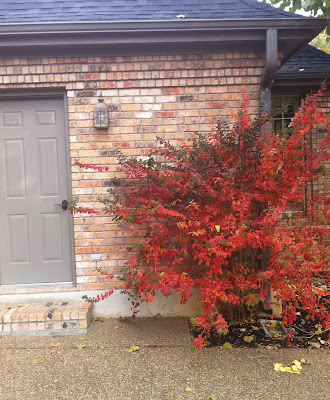 I put that picture on the right there because it was taken last November at my house... and it shows some of nature's beauty this time of year.


For since the creation of the world God’s invisible qualities—his eternal power and divine nature—have been clearly seen, being understood from what has been made, so that people are without excuse.
Romans 1:20