It's been since Sunday. Whoa.

When I don't post after three days I sometimes begin to lose my nerve.
I think, what do I write about?  I can't decide?!  And when I do decide, I think, 'I don't know how to say it'.
... it's all too daunting.

Oh, and I know there are some English teachers out there reading my blog.
Talk about daunting.
(Yes, I used to be an English teacher, but that was in another lifetime, and I've forgotten a lot.)

So much for a fun hobby.

That tells me that people who do things they enjoy need to do them OFTEN, and with abandon... so they (the people and things) won't lose their 'umph'.

Having said that, I decided to blog... and I've made the decision to show you a cartoon I like.
It's totally random... but I've had it a while and I think a lot of people might relate to it....... 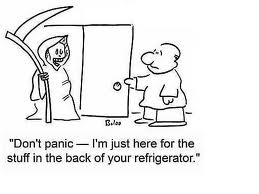 If you don't 'get' that cartoon, then you're organized, neat, and a better person than I!!

---------
I have a new poll up. (upper right)
Thanks for voting on my animal shelter kitty-naming poll.  I so thought my choice would get the most votes.  Goes to show ya we're all different.  (I voted for Lovey.)

"That tells me that people who do things they enjoy need to do them OFTEN, and with abandon... so they (the people and things) won't lose their 'umph'." --> totally agree! and I need to take that advice too.