Two and a half weeks ago something magical happened in the Simpliciteas Tea Room at the LONESTAR ANTIQUES MALL.

Abby got engaged!!
(Abby is my dear friend, whom I've come to know and love
as we work and play in the tea room.) 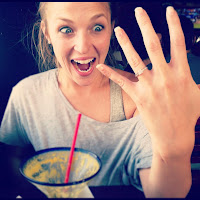 (That picture on the right I stole from Facebook.)

But the other pictures I took myself!

Because I was there!!

When I got to the tea room
at about 11:15,
Abby's sister Alex
told me that at 12:30,
I might ought to quit playing,
because there was going to be a surprise for Abby.
Hmm, I thought...a surprise birthday party! Fun. (Her birthday was the next day.)


Right at 12:30 I heard drums beating... then a bagpipe playing... then some trumpeteers trumpeting, (I forget which order).

Then they marched into the tea room.... 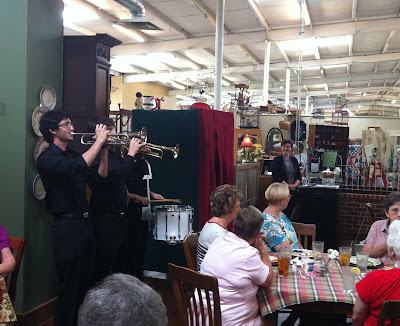 And with them was a kind of mobile stage with a red curtain (you can see it in the above picture).

Then Abby's sister, Alex (who is standing at the register in that picture (behind that blonde lady) took out a large scroll and said in a loud voice, "Hear ye, hear ye!"  I forgot what else she said, but it was announcing a special guest.

Out from behind the red curtain came a young man in an outfit that maybe Romeo would have worn, back in Romeo and Juliet times.

He began walking around the room telling a story..... of how he had met a young maiden... etc., etc...  Every once in a while he would ask the audience (tea room customers) to applaud.  And we did, heartily ....
All while Abby was standing near the kitchen....

Notice the people standing to her right.  They were (are) mainly family members (hers and Chris') who had come for the surprise proposal!  (Then they had a party in the party area, where on the calendar it said 'party of 25'.)   (I think Abby thought it may have been some ladies church group or something.)

Anyway, here is Chris, telling about meeting the love of this life.... 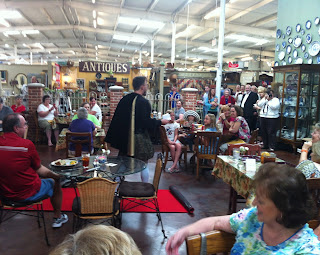 and then he got down on this knee, opened his hand with a ring box, and proposed!!
(I did not get a picture of that, rats.... but soon, the whole thing will be up on YouTube, and I will put the link up here then. )

Here is Abby with her fiance, Chris..... 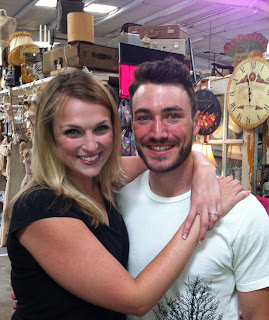 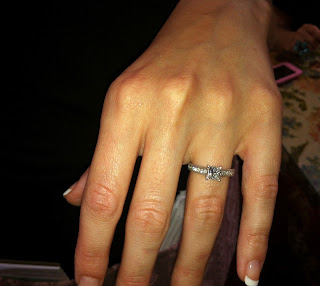 No one in the tea room will forget that day.
It was so exciting!
Some of us were crying... and we all had goosebumps... and anyone who had a cellphone camera was taking pictures.

Whew.  I'm reliving it as I blog about it.  It was so exciting.

'Course not as exciting as when Sam proposed to me: He had just preached a sermon (the first I'd heard him preach) in a little church in southeast Oklahoma, near Hugo, and we were on our way back to Fort Worth, where we both lived, on a Sunday night.  Back then he had a car where I could sit right next to him, with his arm around me.
Out of the blue (it seemed) he whispered in my ear, "Would you like to be my wife?"
My "YES" was so excited that we almost had a wreck!!!
(Seriously.)

(He told me he wanted to see how I reacted to his preaching before he proposed.)
(I must have reacted well.      BUT OF COURSE!!)

Wow! That is wonderful! What a cool story and momentous day.

I don't think I ever heard the story about how Sam proposed to you... so sweet and simple and wonderful ;)