Is there a song you hate? 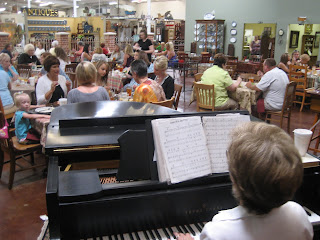 I have some folks who come in and want me to play certain songs.
Some of those folks came in this very day.... and I was happy to oblige.

For instance,  90-year-old Viola came in today.  She always wants to hear "Red Sails in the Sunset" and/or "The Green Green Grass of Home."  Today I played "Red Sails.." (Those highlighted links are to YouTube versions of the songs.)

Another elderly lady who came in today always wants to hear "Alley Cat".... so I did it.

Other days a younger lady comes and always wants to hear "Unchained Melody," one of my favorites.

A beautiful preteen named Grace always wants me to play a SOUND OF MUSIC medley (another one of my favorites).

Ah, but there is one song that I found out was the absolute LEAST favorite of a dealer-friend.   He told me one day that I often play a song that he cannot stand.
He repeated, "I canNOT stand a certain song you play."
Then he said, "No offense."

What on earth would that song be?

Would you believe it was (is) "Wind Beneath My Wings"?!!! (The Bette Midler song sung on the movie BEACHES' soundtrack.)
What on earth?!
"That is beautiful," I said. "One of the most gorgeous songs ever!"

He then asked, "Have you ever listened to the words of that song? Huh, huh?"
"Well, yes." I replied. "I think so."   (People can very easily make me doubt myself.)

He then said, "Nancy, Nancy, Nancy.  That song is the most narcissistic song in the whole history of music.   That's the reason I hate it.  It's awful. I repeat, AWFUL!  I cannot stand it!!"

I had never, ever thought about that before.

What does it say about me, that I rarely play it anymore..... except when I see him coming!!
(Well, I play the beginning of it - to get his goat.)
Seriously, though, I haven't been playing it as much.
Hmm.

Is there a song you detest?
Frankly, I can't think of one...
... although "Alley Cat" may be turning into one.

A hundred bottles of beer on the wall---sang this at camp and it was was soooo boring!

Funny, but both my favorite and my least favorite are Christmas songs.

Ha, Beth. That makes me want to (or not want to) hear that Blue Christmas. I'll bet I won't like it either! Ah, but I LOVE O Holy Night, too.
Thanks for the comment!

We Built This City by Starship! lamest song ever.

IT MUST BE LAME. (I need to proofread.)

In high school we (band) all disliked Stars & Stripes Forever....not because OF the song but because it was Mercedes' fight song....hence be kind to your fine feathered friends, cause a duck may be somebody's Mother....etc. We had a real rivalry going....and Donna too...Mr. MacNallen wrote their fight song backwards for us to play whenever they started playing it.....Wow....that would cause a riot these days!