Last night we had fun with nephew, John, and his girlfriend, Abby... 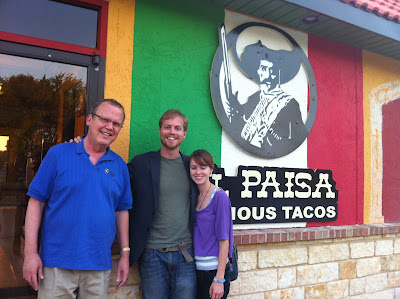 We went to EL PAISA in Bedford and enjoyed some authentic Mexican food.
I ordered the Sopes Plate for a change. (I usually order the Bistec tacos or the beef enchilada platter - which are both WONDERFULLY YUM.)

I changed my order this time because I'd just read that a pastor in the area had declared the Sopes Platter at that EL PAISA to be his favorite plate of food in the entire Metroplex. Whoa.

Now I understand why.
They were DELICIOUS.

I had not known of Sopes before.

I found out they can be called 'tortilla boats' or 'masa boats'.

Here's a picture I found online (because I forgot to take a picture last night)... 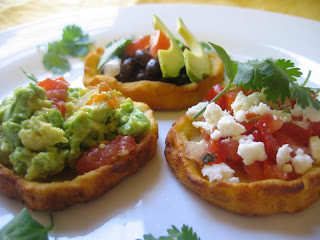 [So now I have a new favorite food.]

After we ate, Sam, John, Abby and I went back to our house and had a wonderful evening of conversation.
I hope we do that again soon, John and Abby!
--------

So Sam and I like to try new places to eat.  We did that with EL PAISA a while back.... and we did it AGAIN just today!!

There is a tire place on Harry Hines in Dallas, and we needed to take Sam's car there late this morning.   We realized it was near lunch time so we began scouting places to eat (which is always fun.)
Harry Hines is not known for its eating places, as you may know, so we had a challenge.

Ah, but we found a hamburger place that MET THE CHALLENGE. 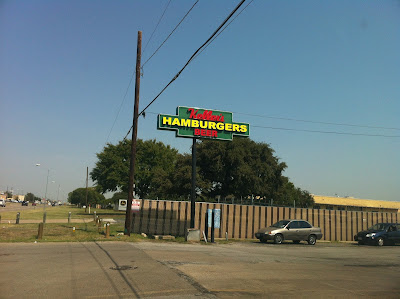 Here's the view from our car... 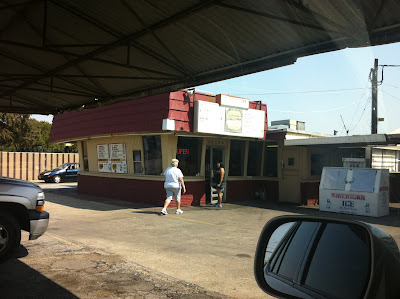 The hamburgers were greasy and delicious!!

It was truly a drive-up place, where they come to your car to get your order.  Our 'waitress' had a funny t-shirt on ("I Keep Hitting 'Delete', But You're Still Here"), and she had lime green nail polish on her nails, with some sparkles, and pink and purple streaks in her hair, and I would put her age at 55.  She was very friendly and we liked her.

We will go back.