He's a Firecracker!  Really. That's the name of his soccer team, THE FIRECRACKERS! 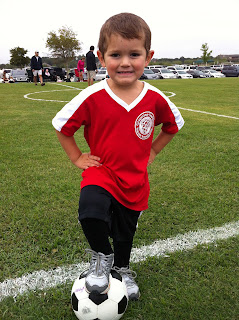 I had the privilege of taking him to his soccer game yesterday morning.
We met his great-grandmother, Alice (whom he calls Coco) and she and I enjoyed the morning talking and laughing and cheering the main Firecracker on!!


First, though, he had to have his snack. 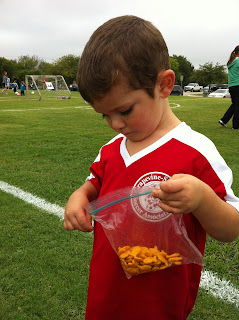 Then Coco made sure his shoes were ready..... 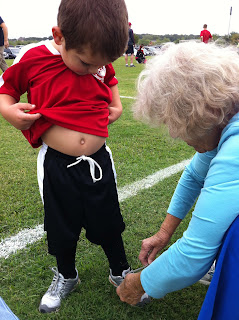 Then he got with his team... 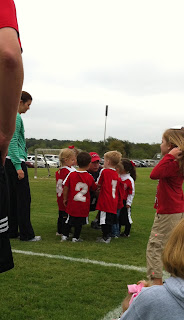 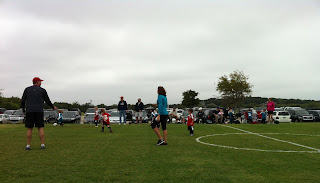 And they played.
You can tell the sky was overcast, and the morning was kind of chilly.  (Yes, chilly. - felt like fall!)

This next picture I didn't take. It was taken on a sunnier day two weeks ago (by Elizabeth), but it shows Andrew going after the ball, and looking like a natural.... which he is. 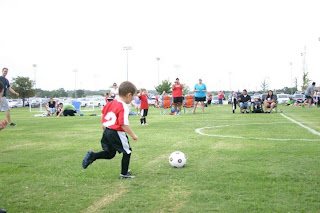 Did you know he made the first goal of the whole season, in the first game, and then scored 2 more times that game?

The next game he scored once, but was playing a hard team.

Yesterday, he scored the first and second goals.  Coco and I were yelling and screaming, so proud.

Unfortunately after half time he just wanted to sit in my lap (Alice-Coco had brought folding chairs, thankfully).  He just didn't want to get back in the game.  Hmm.  How forceful should I get, I thought. Frankly I liked him sitting in my lap.... so I relaxed and enjoyed his precious presence.

Then I took him home, and his Coco brought him one of his favorite things: chocolate milk!