The other day little Caroline came in asking to see the studio. 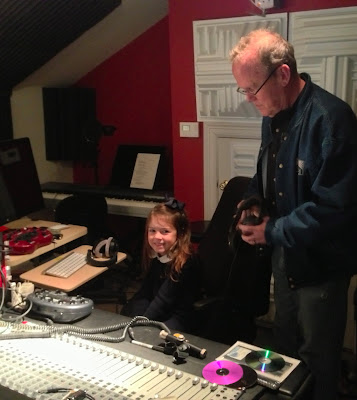 She looks right at home at the sound board, doesn't she?

Why did she want to see it?
Well, she had been listening to a CD Will and Bailey had made for her and her brother and sister of children's songs and she began asking her mother how they made it.
Her mother told her they made it in our studio.
So she wanted to see where it was made.

Talk about a curious, inquisitive mind!

She is always learning!

Oh, and she taught herself how to play "Twinkle, Twinkle Little Star!!"
I mean it.
(The picture I took of her playing it was too blurry to post.)

Well, being curious, inquisitive and ever-learning must run in the family.

Every one of the people in this next picture is a ever-learner . . . 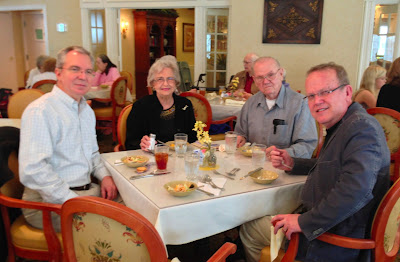 That's my cousin Jim (whom we call 'Tennessee Jim'), my mother, Uncle Warren (Mother's little brother and her only living sibling, and father to Tennessee Jim), and my husband Sam.

Uncle Warren is an A&M graduate and an aeronautical engineer (I think that's the title).  He's also an accomplished artist; learning to paint in his later years and winning art contests around Tennessee, AND he sells his artwork for hundreds of dollars!
(I'm sorry I don't have a picture to show you.)

Anyway, he is a true connoisseur of life.

He knows a good praline when he takes a bite of one.

And he can diligently find recipe for a good one ... and make it.
When he was down couple of weeks ago he found a praline recipe (from my Aunt Ida) in Mother's recipe file (he had a recipe at home, but it was in Tennessee).  He and Mother went to Kroger for the ingredients, and long story short, we've all gained a bit of weight.

Fortunately I took a picture right before I devoured... 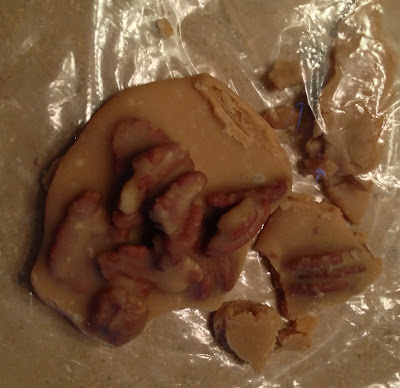 He'd given each of us (that were sitting at the above table) our own packages of it, in ziplock sandwich bags.
I had never tasted a better praline.
(As Uncle Warren would tell you, every praline isn't created equal.  Some are just sugar.)

I guess I should have made my new poll including pralines.
Instead it's about whose concert would you rather attend.
Please vote. (upper left)
(Soon I'll poll one including pralines.)
-----------
In closing, and on a TOTALLY different note, here are some (quirky) quotes I like by Steven Wright....

Sponges grow in the ocean. That just kills me. I wonder how much deeper the ocean would be if that didn't happen.

I've been doing a lot of abstract painting lately, extremely abstract. No brush, no paint, no canvas, I just think about it.

Cross country skiing is great if you live in a small country.


Those made ME chuckle anyway.

Have a good day.

You know that second one, about the abstract painting, reminds me of an actual art movement called conceptual art--where the art is in the CONCEPT rather than the actual product. Like Marcel Duchamp who just signed his name on a urinal and put it in a art gallery. He didn't make the urinal, but he was just trying to get people to think about the nature of art and the concept was his artwork.

Didn't mean to go on so long about that! But just FYI.

I want a praline now.