Are you kidding me?

Here are some things I've found kind of funny... maybe you will, too.

Two hats were hanging on a hat rack in the hallway. One hat said to the other: 'You stay here; I'll go on a head.'

A grenade thrown into a kitchen in France would result in Linoleum Blownapart.

Simba was walking too slow, so I told him to Mufasa.

The soldier who survived mustard gas and pepper spray is now a seasoned veteran.

The surest sign that intelligent life exists elsewhere in the universe is that it has never tried to contact us. ~ Bill Watterson, Calvin and Hobbes


"I can win an argument on any topic, against any opponent. People know this, and steer clear of me at parties. Often, as a sign of their great respect, they don't even invite me." - Dave Barry


"I went to a bookstore and asked the saleswoman where the Self Help section was. She said if she told me it would defeat the purpose." - Dennis Miller


And here are two random cartoons... 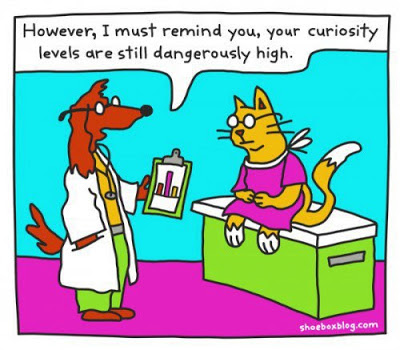 If you haven't voted on my latest poll (upper right), please do.  Thanks!

So funny! My favorite was the kitty cartoon