Is this Crazy Kid Day? 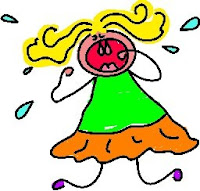 The tea room was crazy busy today. There were lots customers, plus a party of 28 in the party area. What was super crazy, though, was the number of out-of-control kids there.

First there was a toddler girl who just kept screaming, and then she started running around, and then punching the keys of an antique organ and her mother and her mother’s friends sat there talking.  It was incredible.  They were there for like an hour and a half.

As soon as they left there was a group of eight that came in and sat at their reserved table, which was right in front of the piano.  Five of those eight were little ones, with two of them being toddlers - and those toddlers yelled and cried loudly like I couldn’t believe, and their mothers just sat there talking to each other.  I usually play till one thirty.  I left 30 minutes early - and went and worked in Mother's and my booth.

While I was working in the outer front part of the booth, a little (different) toddler started running around in it.  "Whoa," I said, "You need to stop!" Fortunately her father noticed and ran after her before any damage was done.  (I have lots of breakable stuff in my booth.)   Is this crazy kid Friday?  Or bad parent Friday?   I happened to talk to 2 sets of  customers as I was leaving the building and they all were talking about how crazy the kids were today... and how their mothers were letting them be crazy.    Talk about crazy.

I seriously thought about giving some money to that party of eight and telling them where the nearest McDonald's was.

Thanks for letting me vent.

Any time I am somewhere, surrounded by out-of-control little ones, I just try and finish up whatever I am doing as quickly as I can, and vacate the premises. Kind of rotten when you are out, trying to enjoy a nice and leisurely meal with friends or family. Even worse - being stuck on an airplane for a long flight with one or more sitting next to you or behind you kicking the seat constantly. Kind of difficult to "vacate the premises" then lol.

i too try to get out of there ASAP - as in asking for a to go box and leaving to finish my meal at home. But in addition, if this is a frequent occurrence at places I go often, I let the management know that unless they do something to manage parents with out of control children, I will no longer eat there. I don't think there is a way for other diners to solve the problem, but more and more I see restaurants either banning young children or stating clearly that if parents do not control their children they will be asked to leave. It's one thing to try to teach your children how to behave in a restaurant. It's another thing entirely to NOT teach them or try to teach them when the child is clearly in need of a nap and some attention from mommy.

Maybe it's the rain and mommies and daddies and kiddies are all going crazy! No excuse - I hate it when parents won't parent! All the mommies I know who are committed to being GREAT mommies have GREAT babies!!

It was the changing weather.I know because I taught school 29 years. I know about full moons too.Sometimes the kids just can't help themselves.

Those are great comments, Deanna, Beth, Sara and anonymous.

Maybe I should excuse that crazy kid behavior on the weather. Yeah.
Thanks for that insight!!

Annoying kids can bother me too, but I must say that I think Americans are perhaps a bit too bothered by it... Since spending time in several other countries this past year, I've noticed that other cultures (at least European ones) don't seem to mind when kids are just having fun as much as Americans seem to mind. Of course, there will always be kids that could be behaving better than they are because their parents let them go crazy. And of course, I wasn't there to see what they were doing... but still. It seems like it's a big cultural thing, so maybe they were from a different culture ;)

(That being said, I DO get bothered when I'm trying to have a nice, quiet meal and it is continually interrupted by annoying children. But I will have one of my own soon, so I'm sure I'll be quite sympathetic to parental attempts to control noise levels :/)

Just the Two of Us

... for Thanksgiving. We've been married 42 years - and that is how long we have NEVER been away from some of our family members for Tha...