It was when I was on my way home from The Collective last night that I realized how much I got from it.   And even then I'm sure I got more than I realized.

So what was The Collective?  You can click HERE to go to the site that tells you what it is (was) last night.
Or you can look at the following pictures and see if you can figure it out.

I mostly got these pictures off of Facebook because for some reason most of the pictures I took last night turned out fuzzy.  (Thanks, Caroline and Kaylin, for posting these on FB.) 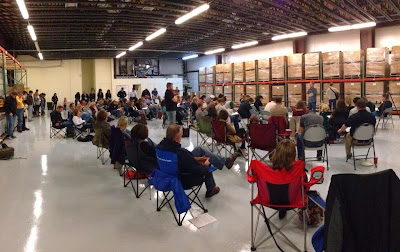 Here's Rob handing out the song sheets and Scripture verses... 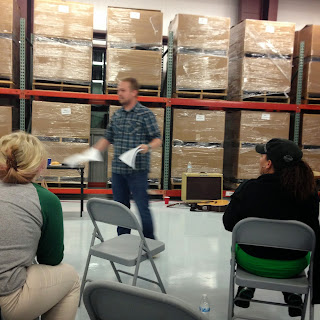 Here are the music leaders.... 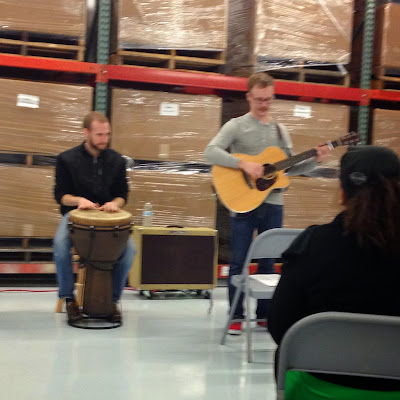 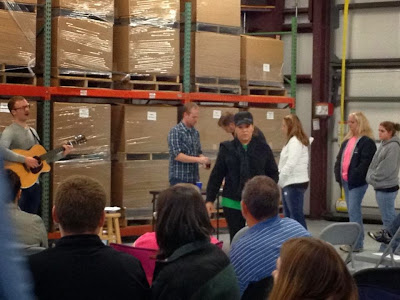 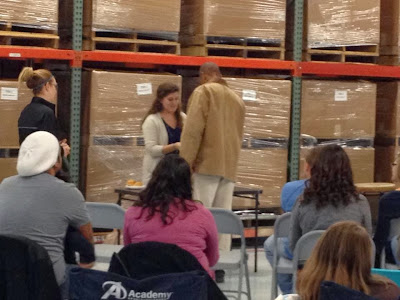 There were two communion tables on either side of the 'stage' - which was the floor of the airport hangar.   (You - if you wanted to participate - would grab a tiny piece of bread and dip it in the wine or grape juice and eat it right then.)

Yes, this was all done at (in) an airport hangar at the Roanoke, TX airport.

Here's what the place looked like the afternoon before the evening... 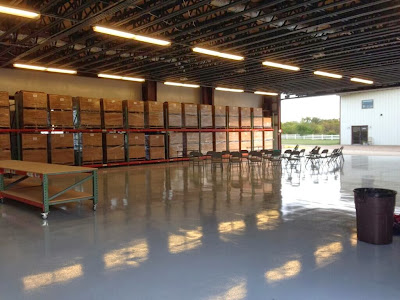 On the left of that big table-thing were tables set up for food.  I'm not talking just snacks.  I'm talking lasagne, chicken alfredo, yummy salad, bread, and lots of yummy desserts that were mostly homemade.

Here is my fuzzy picture of some of the people eating before the service/program started.... 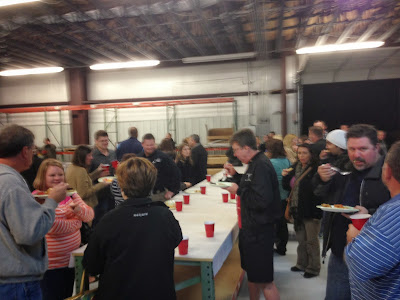 I know you didn't need to see all those pictures, but I wanted to give you a 'feel' of the event.
Why I didn't take pictures of Will and Bailey and Rob's brother John, I don't know.  If only I could rewind time....

So it was WONDERFUL.  FANTASTIC.  AMAZING.

Over 100 people came out last night to that hangar way up north of Roanoke.  One lady pointed to all the people and said to me, "This huge group is a testament to Rob and his influence on people's lives."
Yes.

When I was driving home I was on a high.  It's hard to describe.
I felt so peaceful... and clean... and happy... and close to God.

Near the end of the message, Rob talked about the Cathedral of Junk in Austin.  It's in the backyard of a regular guy's house... and well, I wish that guy -Vince - had a website.  Ah, but you can read about it and see a few pictures of it if you click HERE.

Rob's point: God can make a cathedral out of your/my junk.

The whole event was so out of the box.
The location, the music, the message, the communion, everything (even the orange soda and root beer they served with the chicken alfredo) was out of the box.  All of that out-of-the-box stuff, well, it made it so refreshing.  :)

I drove home smiling all the way... and praising God... for this wonderful thing, The Collective.

And folks, there will be another event of The Collective in December.  It will be somewhere else and it will be different.
That piques my interest, doesn't it yours?

I'll keep you posted.
Until then, click HERE to read Rob's post about last night.  Oh, and look at the "About" section at the top of the blog. It's interesting!

I'm so disappointed I had to miss! I was called on last minute to fill in on tech at BVCC. Hopefully, I can make it to the next event!