Me and the miracle on the morning of Peggy's funeral...

(I'm telling this now, because my last post was about Peggy's victory over her fear of death.
So now I'll tell you mine (kind of).)

Even though I had known my twin Peggy would die - and we'd have her funeral- I felt weird.
(I've found that even though a person may be terminal, said person is still with you... and very much alive... until he/she dies.)

So we flew to Houston to stay at a hotel ... and make arrangements... and then the evening of April 14th, we went to the 'visitation time' at the funeral home in Katy.   I remember I couldn't wait to see her... as not alive.  (I needed to... somehow.)   Her canula indentation was still on her skin... and she was lifeless and felt hard.   But they made her look beautiful.

And then, Diane.... our dear best friend from Mission .... Diane Williams... came running into the chapel.  I cannot tell you how much that meant to me.  She had come all the way from Mission.  (Well, she had visited Peggy in the hospice, too --- as had Ron Hyde (our dear, wonderful friend), and our beloved pastor Glenn McCollum and his dear daughter, Tammie.) (I cannot tell you how much their visits meant.  I can almost relive them.)

Anyway, at Peggy's visitation (which I think Catholics call a 'wake') it was surreal... and yet, too real.

We met a few friends of Peggy's who treated me as kind of a ghost.  They couldn't believe I was there and that I looked so much like her.  (We'd never thought of ourselves as truly identical.)

Anyway, we went back to the hotel... and set the alarm so as to get up for the 10 o'clock funeral the next morning at Kingsland Baptist Church in Katy.

Well, I got up the next morning.... and after I showered and got completely ready and was ready to awaken Sam, I realized I'd gotten up 2 hours earlier than I meant to.
So I sat in the chair by the desk in my funeral attire... and felt weird, yet kind of numb.
I knew this day would come.   But it felt weird.
I remember grabbing the Gideon Bible on the desk.. and, while feeling weird, just opened it randomly.
My eyes hit on Job chapter 17, verse 1.
It read.... "My breath is corrupt, my days are extinct, the graves are ready for me."

I stared at those words.
They seemed to be from God AND Peggy.

And it was if my world were swimming around me - as in movies, where the character is suddenly found to be in the center of cameras going round and round and round.

I felt - profoundly - that God was holding me in his arms and telling me that Peggy's grave was ready for her.
I cannot tell you the profound peace I felt.

Peggy was just 37.  Too young.
And yet I truly believe that God was telling me that, though she was young, the grave WAS READY FOR HER.

Can you imagine the peace and comfort of that?!?

I often relive it..... and find myself profusely thanking God for it.  It was (is) profound.

Sam told of my experience that next day when he spoke at Peggy's graveside service in little Colfax, Texas, where  all of the Will White clan are buried.

And I'm telling it here.

I'm so glad I got to be Peggy's twin.
I still consider myself as a twin.  ('Twinless twin' is the expression used.)

I'm working on finishing that book.... and I have lots more to tell.
And the telling of it is cathartic.
Yes.

In closing, here we are on Halloween many years ago.... 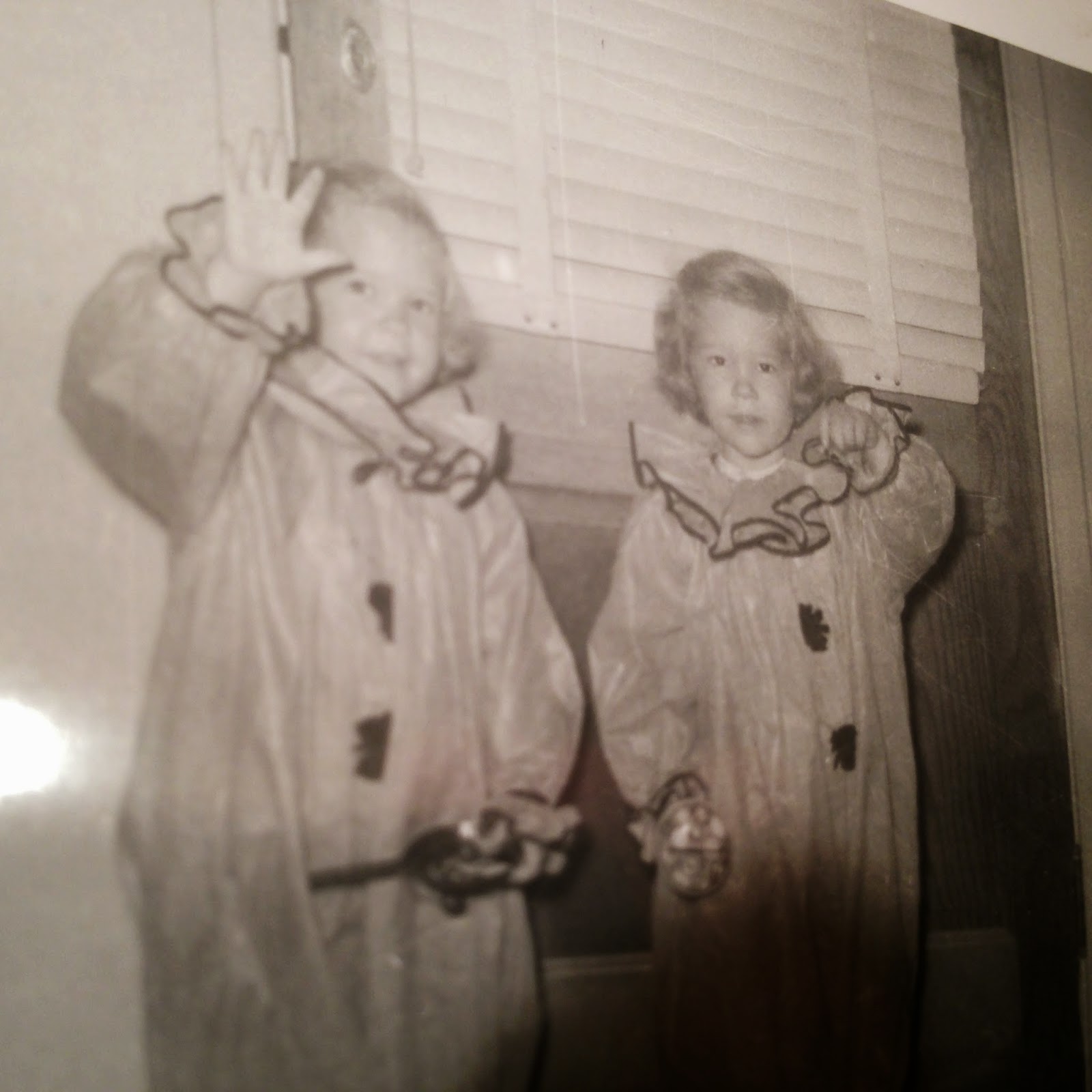 Email ThisBlogThis!Share to TwitterShare to FacebookShare to Pinterest
Labels: Peggy

Thank you for this. We buried my brother, Victor Norman, last week, we were not ready to let him go even though there were many health problems in the last few years. surreal is a good word to describe the experience. I think of you every year on your birthday, often wondering were you were and how you were doing. It's been nice to reconnect, even though it's through Facebook.

Melissa, I am so very sorry about your brother.

I think of you also on January 6 - the day before our birthday. I remember having a party together at a skating rink.:)

My heart goes out to you.
(I will tell Mother.)

My heart is in my throat and I can't breathe... and I'm not really sure what to say... but I can picture this exact moment. And I want to hug you so tightly. You aren't a twinless twin at all. Peggy is still here. And still your twin. :)

In 1943, Ignacio Anaya, a Mexican restaurant owner, found himself in a bad predicament. His cook was missing, food needed to be prepared, s...