Yesterday in the tea room there was a family of about eight people - three generations - who sat down and seemed to be really enjoying themselves.  (Most people enjoy themselves in the tea room.)

After a while everyone's food was brought out.
Then the grandmother figure said, "Let's say 'Grace'.
I watched as they all held hands and they all said - in unison - the word "Grace".
Then they began eating.

Well, I liked seeing that.

It was just the word 'Grace'.
They said it pretty loudly...
And I liked that.

I don't know how you feel about praying in public before a meal.
My family usually does it.
But I know someone who told me years ago that she thinks that it is pious and presumptuous for folks to do that.
She said it is 'arrogant' and 'showy'.

I remember thinking: that tells me more about her than about people thanking God for the food they're getting ready to eat.

I DO have this major opinion, though: if people pray in public before eating, they should leave a BIG TIP!!
(I won't harp on this too much except to say what many people know: Sunday church-goers are known for not leaving good tips.    Whether that is true or not, I'm not sure.  It could be a kind of prejudice toward church-goers, to say that.)

Anyway,  I like that 'Saying GRACE' thing.
Do a lot of people do that?
(Sometimes I'm not in the know on stuff.) 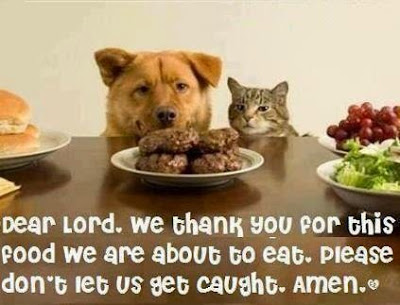