(I didn't get a picture of him, but Public Domain pictures gave me this one... which kind of resembled him... 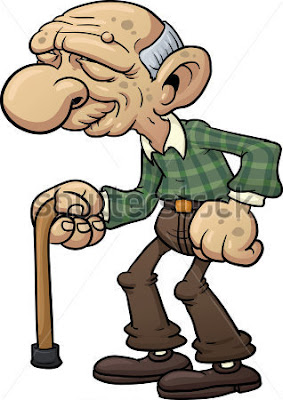 He came in with a retirement community group.  I noticed their bus outside. They had scheduled a party in the party area, but when he heard me playing he hobbled over and started whistling to some tunes I was playing, like "Hey, Good Lookin'" and "Last Date" ... and "Born to Lose".
He had a great whistle ... and he kind of danced with his cane to my tunes.
Several of the waiters and customers were smiling.
This lasted for several minutes - maybe 20.

When I stopped and told him he might ought to go join his group so he could order his meal, he said, "Yeah, I ought to be with them."
Then he said, "My kids put me in that old folks' home.  You know, I have a good mind. I am really smart. Really.  I just can't remember things.  I can't memorize things."

Then he asked me where we were.  I said, "Well, we're in Haltom City." He looked confused.  "It's near Fort Worth," I added.

Then he told me three times in the course of a just a few minutes that he was a part of the military for 20 years and one month, mainly in South Dakota.  And he really liked it. Then his wife insisted they move back to Texas.
He said that about three - maybe four- times.

And he repeated that he was really smart in his mind... but he couldn't remember things and his kids put him in the old folks' home.

My heart went out to him.

I think he was where he needed to be. (I think.)


I was glad he could whistle ... and dance a little to my tunes.

It's not super important...
but it's important enough for me...
and that sweet old man.

Thats a sweet encounter! And yeah, it sounds like its where he needs to be. So nice to be able to brighten up his day with some music! Some days you gotta dance... (that's from a Dixie Chicks song)