Friday afternoon I took great-nephew Andrew to Toys-R-Us
to get some Legos (for his 7th birthday).
(Mother and I had each given him some money for Legos.
We had no idea which ones he wanted...
so we decided to let him pick out what he wanted.)

I thought it would be a long shopping experience. 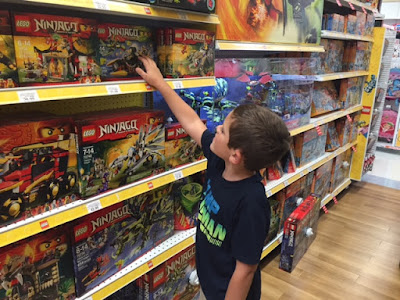 Wow. There are so many more kinds of Legos than there used to be...
but he was decisive.
(As men can be.)

His (kind of) Uncle Will used to be into Legos, too...
and I think I still have some scars on the bottoms of my feet from stepping on them.
(not really)

Anyway, Will would spend hours building who knows what with Legos.
(It was a great Lego-childhood.)

Did you know that Legos go back to 1932 when the company was founded in Denmark?
Actually Lego began manufacturing interlocking toy bricks in 1949.
According to Wikipedia, since then a global Lego subculture has developed, supporting movies, games, competitions, and six themes amusement parks under the Legoland brand. As of 2013, around 560 billion Lego parts have been produced. In February 2015, Lego replaced Ferrari as BRAND FINANCE's "World's most powerful brand".

Oh, and here's more info:
The word Lego is derived from the Danish words "leg godt", meaning "play well". The word "lego" also means "I put together" in Latin, and "I connect" or "I tie" in Italian.

Oh, and in the first half of 2014 the Lego Group became the world's largest toy company by market value, surpassing Mattel.

After we got Andrew's Legos,  we got some pizza. 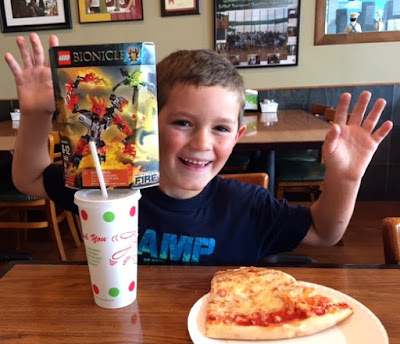 And that whole experience translated into FUN!!!!


That makes me think that time with little relatives ... is so worth it.

He and I hadn't been together one on one since - well, ever.

And it was my loss.

Andrew is a jewel of a person.

I so enjoyed being with him!

Email ThisBlogThis!Share to TwitterShare to FacebookShare to Pinterest
Labels: Andrew

The picture of Andrew is so cute!! He looks so pleased!! I enjoyed Legos too, but I didn't know any of those details! I like where the name came from!! :)