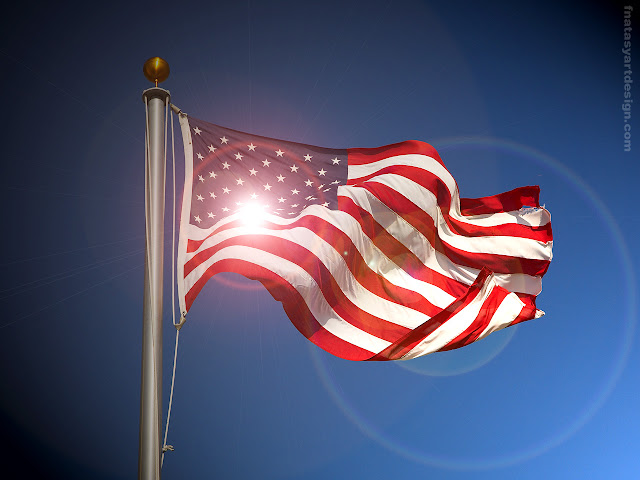 Bernard J. Cigrand is considered the father of Flag Day. In 1885, as a young teacher at a high school in Waubeka, Wisconsin, Cigrand put a small flag on his desk and told his students to write essays about it. He fought for the rest of his life to formally establish the holiday.

In 1916, President Woodrow Wilson made a presidential proclamation, which officially established Flag Day. It was not until 1949, however, that President Harry Truman signed an act of Congress designating June 14 as Flag Day.

The flag's colors have become significant over time. The white is for purity, the red is for valor and the blue is for justice.

My dad flew the American flag on this day every year, as well as on every other patriotic day.
My dad was VERY patriotic.

Now for some totally different trivia....

The phrase "sleep tight" originated when mattresses were set upon ropes woven through the bed frame. To remedy sagging ropes, one would use a bed key to tighten the rope. An adult bedbug can survive up to one year without feeding.

My husband is from Oklahoma.
I had never thought much about Oklahoma until I met him.
But now I think A LOT of Oklahoma.

The folks are wonderful.
They're pioneering folk.
Friendly.
Grounded.
Solid.

Here are some Oklahoma facts...
Oklahoma has parts of four mountain ranges:
Ouachitas, Arbuckles, Wichitas and the Ozarks.

No other state has as many man-made lakes: 200

Turner Falls is the oldest state park.
The state's largest lake is Lake Eufaula.
The honey bee is the state insect.

Samuel Williams Carmack VI was born in OKC in 1984.

Laura Katherine Carmack (Maxwell) was born in Lawton, OK in 1986.

They are both distinguished individuals in the U.S.A, 2016.