I have several things on today's post, but can't figure out a title.
Oh well.


In this Presidential election cycle folks are not rallying around the candidates.
I have noticed very few bumper stickers for either Hillary or Trump. 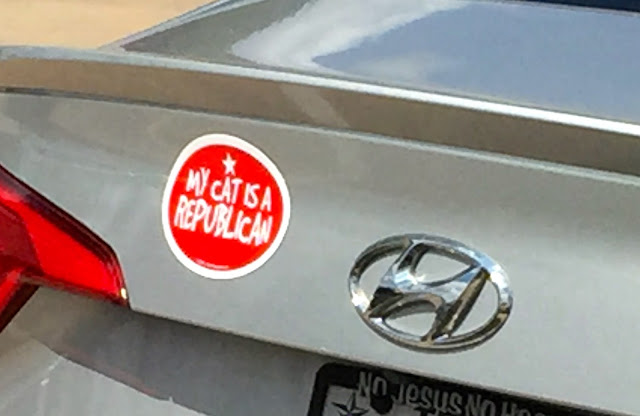 ----------
On a different note,
I read recently that an "America's Got Talent" contestant 'destroyed' a Katy Perry song. I thought, what a shame that that contestant did such an awful job on that song that they said she destroyed it.. Bless her heart.
But NO. Saying she 'destroyed' it meant she hit it out of the park. (I understand that idiom.)

It's like when 'bad' meant great. (I think bad means bad now, right?)

In other news...
As I type these words my little 10 month-old grandson is rolling around on the floor...

In prayer-request news, he needs another eye surgery.
It is scheduled for early October.
The doctor will tighten the muscles around his eyes so they can both see straight.
The doctor was very surprised that Liam's eyes had reverted back after the first surgery,
so he (the doctor) will do a more thorough job.
(I'm thinking that is how he might have worded it.)
Anyway, thank you for praying for little Liam.
(And for his parents.)

In other news, I have started back teaching ESL (English as a Second Language) at Bear Valley Church. I'm actually substituting for a while as Velia is on a big break.
I have one student, Rafaela, who is from the Dominican Republic.
She is a precious lady, and very eager to learn English.

In the other class is a family from Iraq.
Their story is the stuff of books and movies... and horror.
Two years ago, when their third child was just 4 days old, ISIS came into their town
and demanded allegiance to Allah, or be killed.
Fortunately ISIS gave the town 30 minutes to leave before being killed.
This was a city (or village) that was made up mostly of Christians.
Most everyone fled.
Long story short, they ended up here about 2 months ago.
The wife was a dentist in Iraq and the husband was an agricultural engineer.
Now she has no job, and he is working (for the last 3 weeks) at a nearby Walmart.
They do not receive refugee help because they do not qualify as refugees,
as they have some family in the States.
As I understand it, Bear Valley helped them furnish an apartment,
and are getting them acclimated to a very different life here.
Pray for them.
The father's name is Imad.
I know the others' names, but won't write them here.
I did ask our ESL director if I could blog a bit about them and she (Peggy) said yes.

Anyway, so now we have met victims of ISIS.
Pray for Imad and his family.

In other news, Friday night I dreamed I was traveling in Wales.
I'll tell you soon about why I had that dream.
(It is a good story.)
(Stay tuned)
---------
Tomorrow will be trivia - and it will be mainly about some interesting things about football.
I found it fascinating - and I'm not a big football fan.
----------
I hope you are having a good Monday.
I am.