I have discovered that some words are magical!!

I've known these two words all of my life. But I don't think I realized their power until recently.

For the first word, here's the story:
Not too long ago my little granddaughter Nell started having anxiety issues when she found herself separated from her mommy, or even at the anticipation of being separated from her.  Knowing that is not too uncommon behavior for a 2 1/2 year old was helping in our acceptance of her anxiety, but it was not fun, shall we say. Yes, she was seeming to behave normal for her age. Still, her melt-downs (or explosions of tears and screaming) were not pleasant. She had had the summer at home with her mommy, and when she started a preschool program (because her mommy started a job), well, Nell was NOT liking it. A few times I would pick her up to take her to my house, and well, she would refuse to get into the car. Since I am more muscular than she, I would ‘win.' I would force her into the car and car seat, but it was not a pleasant ‘win’.
And when Bailey and/or Will would drop her off at my house on occasion, well, Nell did not like it at all. (The term 'temper tantrum' comes to mind.)

So one day, Bailey texted me that she had told Nell there was going to be a party at Grammy's house that day. She thought the word 'party' would do the trick. IT DID!!
When I got that text I decided that maybe I would let Nell have some extra ice cream that day, and maybe get out a candle that she could blow out. 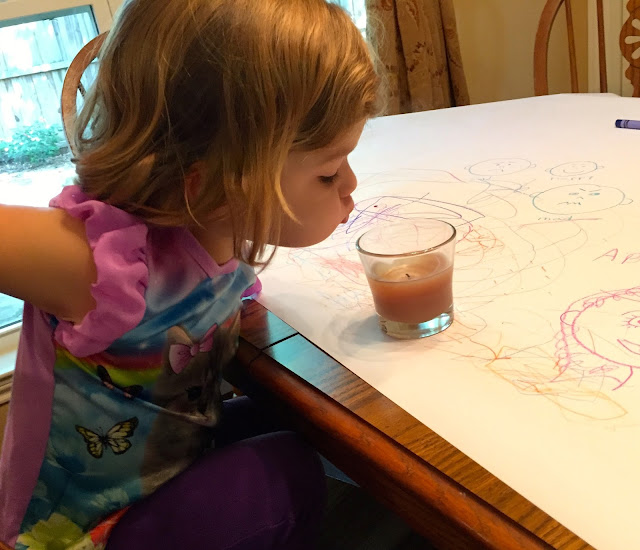 (Glade candles, by the way, don't have a super amount of scent, so I guess that was good in that case.)

So PARTY was the magic word!

Now I don't think it would work with an older child or adult, BUT the next day when I was getting ready for the day, I told myself that I was going to have a party all day... with myself.  And it made the day better!!! (Except when I forgot to think about it.)

SO... just use the word PARTY... and see if maybe you're not smiling a bit for a while!

---------
The second word that I found was magical was a word I read about in an article... and immediately l loved the idea behind it.

I tend to want to be normal, like everybody else. I even sometimes try to figure out what is normal these days and comply.
Ah, but now I'm not so into that pursuit.
I won't go into detail; I'll just let you read the article for yourself. (The first paragraph didn't do much for me, but I kept reading and really liked what I read!!) It is not a long article, but I found it worth my time... and hopefully worth yours.
It's "A Weird Trick to Free Yourself From Your Identity."  I hope you click that and read the article.