My mother's little brother Warren died Nov. 27. His graveside service was in northeast Arkansas last Saturday. I'm so glad Sam and I got to go. (His memorial service will be in Tennessee this Saturday.)


Here he is at one of his most favorite places in the world, EL FENIX, in Oak Cliff, Dallas.
That's where he took his wife (of 65 years!) on their very first date. And that is the booth in which they sat.
Look closely and you'll see he his holding some pralines.
Uncle Warren was a praline connoisseur.
He even made his own, but when in Texas he would load up on El Fenix's pralines. 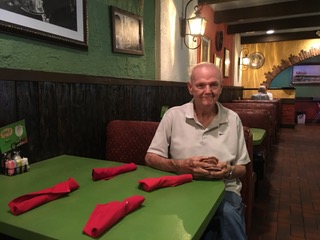 Here we are...when Sam and I attended the Mexican dinner before his graveside service...

It was only appropriate that the evening before his graveside service part of his family gathered at a Mexican restaurant - in Jonesboro, Arkansas.


And Sam and I gave out some pralines we'd brought from the El Fenix in Grapevine,TX.

As to who Uncle Warren was, here he is in a family picture. He's the fifth child of Earl and Ora White. He is to the right (our left) of my mother in the back row.

Fast forward many years and here is Mother with little brother on the right,
and Uncle Warren's son, Jim, on the left. 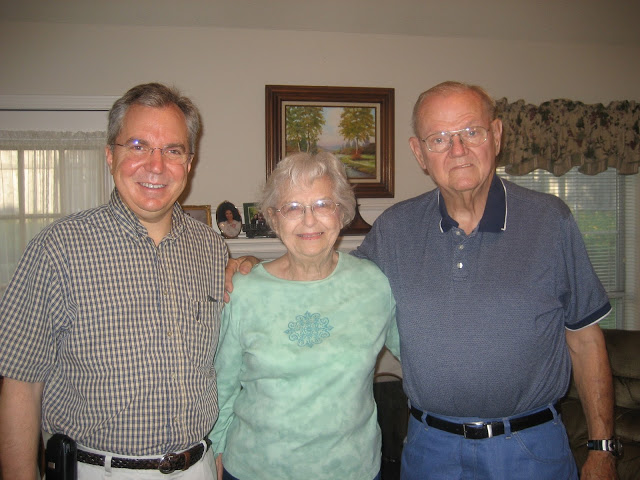 And I got to be in a picture, too. 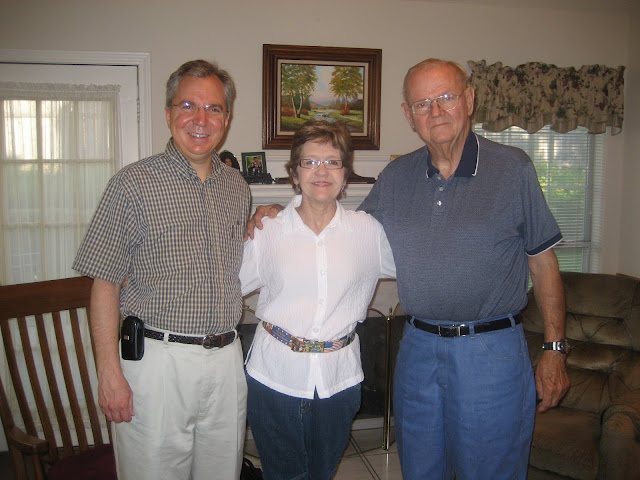 Jim would always bring his dad to Texas in Jim's plane.... 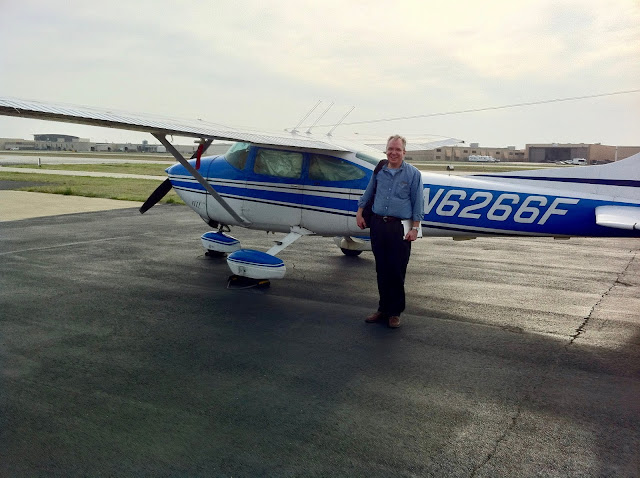 A few years ago Aunt Helen joined them, and we all went to El Fenix!! 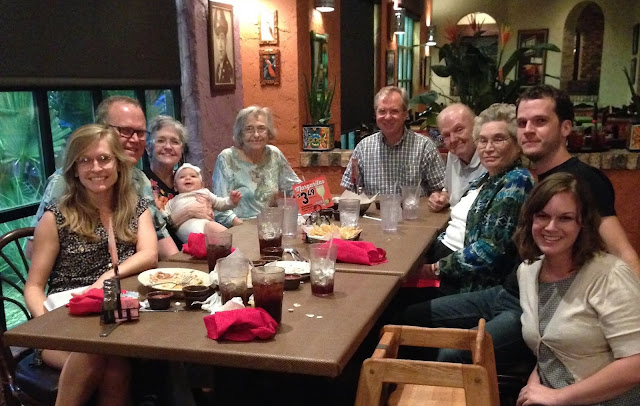 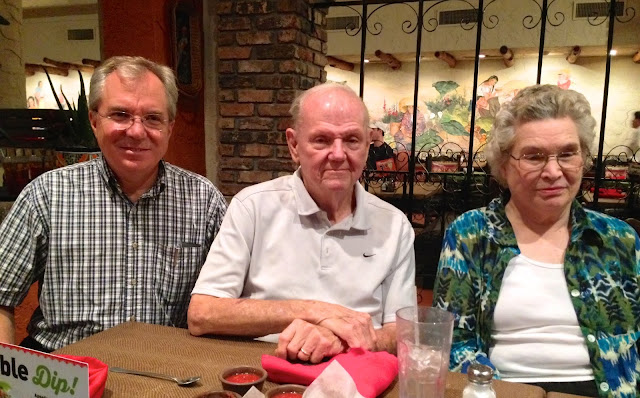 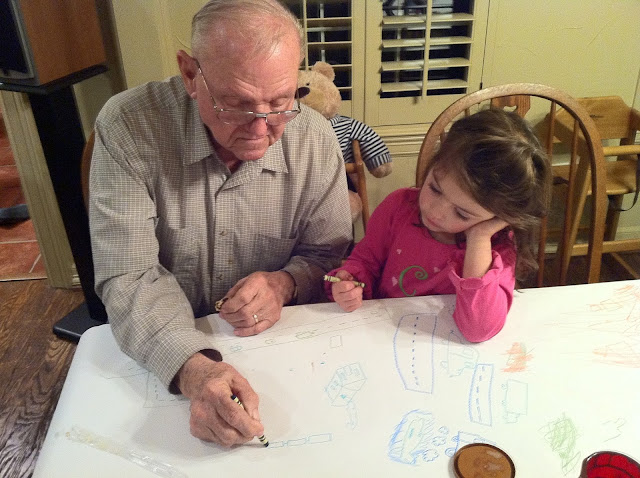 And here is Aunt Helen, Uncle Warren and Mother at a family reunion at our house a while back... 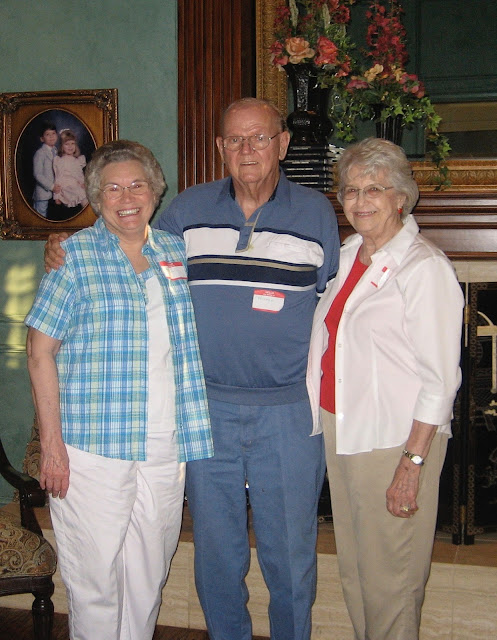 Well, I could go on and on showing lots of pictures,


But for now here are some of last Saturday's graveside service near Swifton, Arkansas, in the Arnold cemetery.

First, the drive out there. 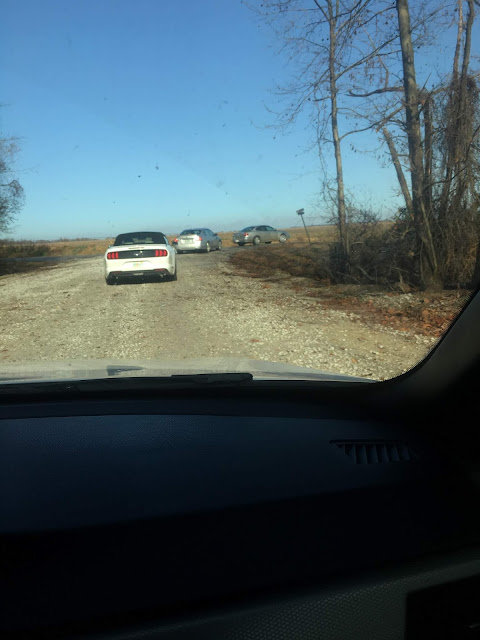 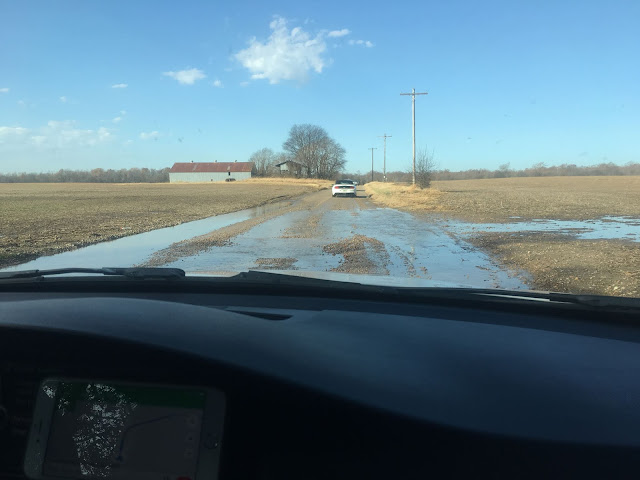 It was a long drive down some dirt roads, but we made it. 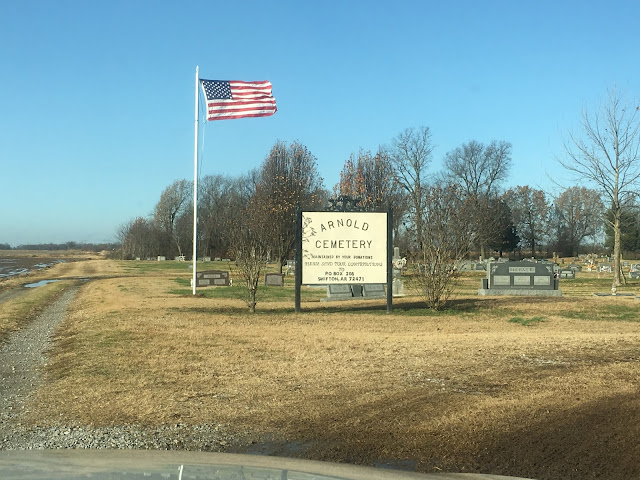 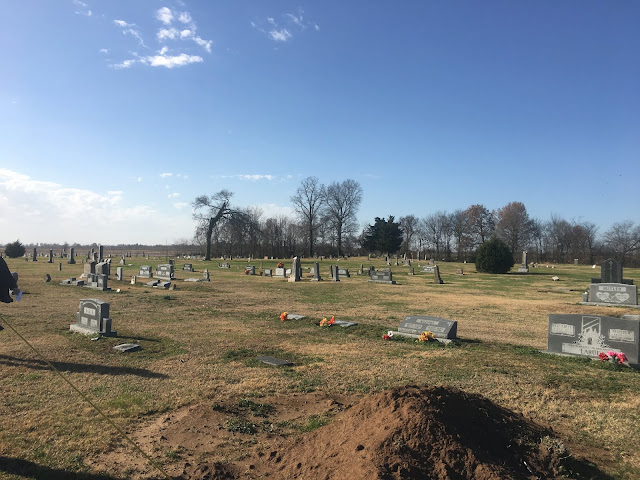 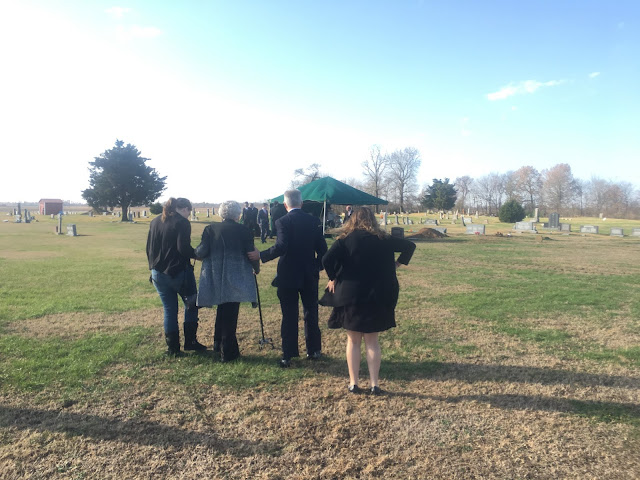 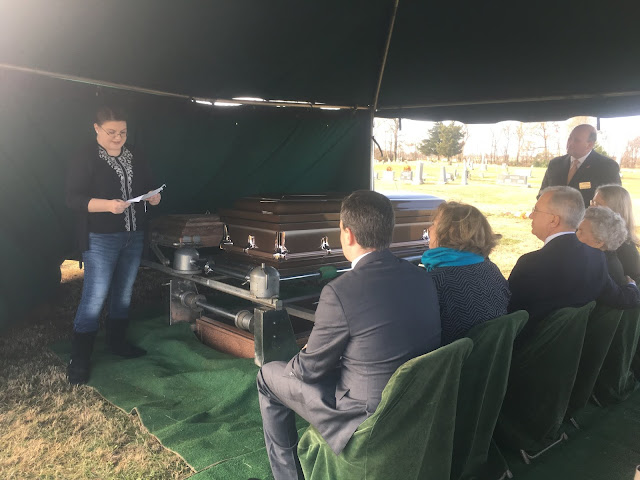 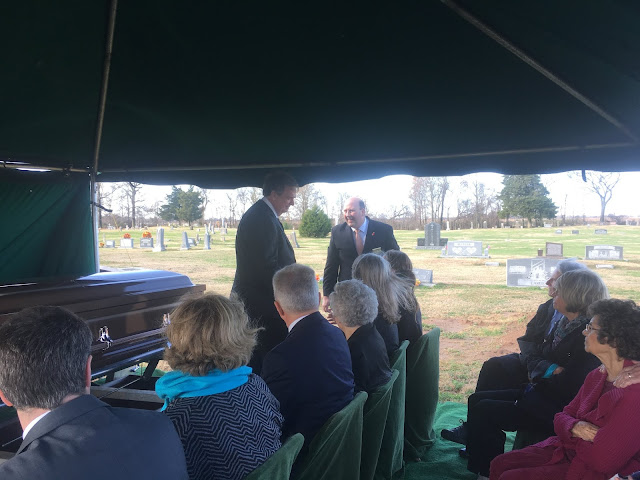 Oh. I learned Uncle Warren really liked the song "Dominique" from THE SINGING NUN movie!
You just never know what folks like, unless you ask them.
I'm so glad Pastor Tom asked Warren about his favorite music!

Here are some pictures I took after the service... 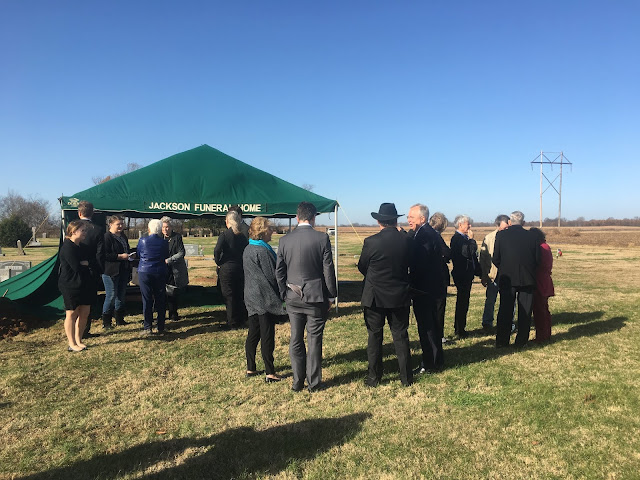 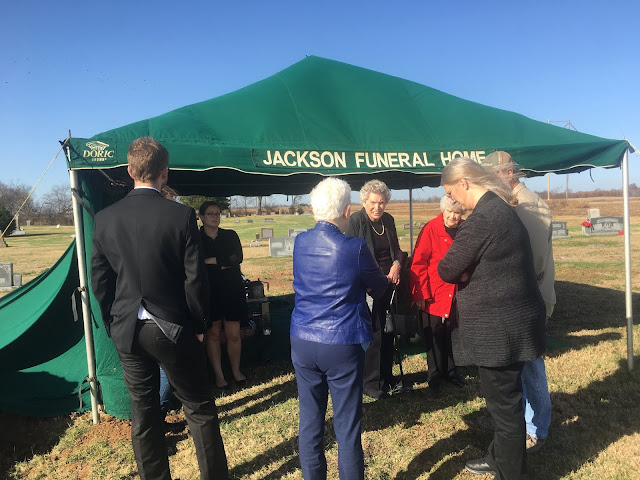 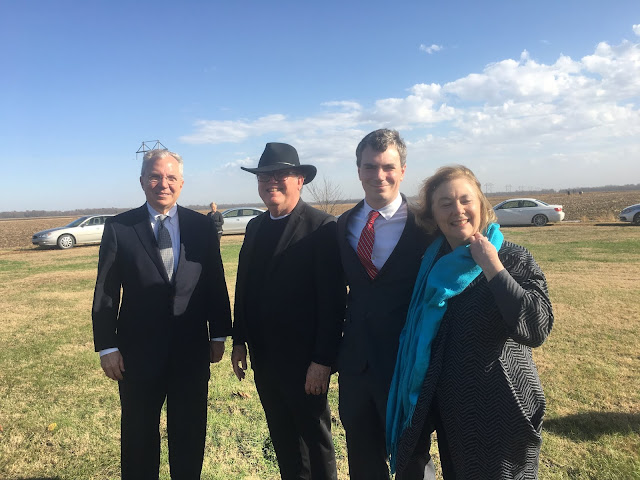 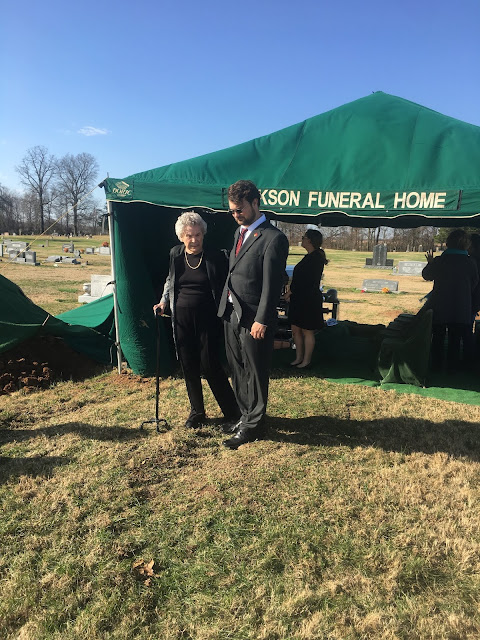 Oh, and Pastor Tom told me that Uncle Warren would talk a lot about his anticipated trips to see his sister in Texas. Is that not wonderful?
Yes. It's wonderful.

Here is his obituary, if you'd like to read it. You will see he was VERY interesting!!

Warren Eugene White of Tullahoma passed this life on Tuesday, November 27, 2018 at Morning Pointe of Tullahoma at the age of 87 years. Graveside services are scheduled for Saturday, December 1, 2018, at Arnold Cemetery near Swifton, Arkansas. A memorial service will be held at First Christian Church of Tullahoma on Saturday, December 8, 2018, at 2 pm CST, led by the Reverend Tom Murdock. The family will receive friends from 1-2 pm.
Mr. White was the son of the late James Earl and Ora Prather White. He was born in Waukesha, WI and grew up in Dallas, TX. He was a U.S. Army veteran and a graduate of Texas A & M University where he earned a degree in Aeronautical Engineering. After graduation he and Helen Baker White, the love of his life, moved to Tullahoma and he took an engineering position at the Arnold Engineering Development Center (AEDC) in Tullahoma. He worked at the Propulsion Wind Tunnel at AEDC for 34 years. After retirement, he became a Tullahoma school crossing guard for ten years. Many Tullahoma residents remember him at the intersection of Kings Lane and Country Club Drive.
Mr. White was an active member of First Christian Church, Tullahoma, volunteering with the church maintenance SWATT team and participating in the sharing group. He was a pilot and artist whose work was shown at the Tullahoma Art Center. He also served as past president of the Tullahoma Kiwanis Club and was active in other community service.
In addition to his parents, he was preceded in death by brothers, Jim, Harold, Boyd and Roger White and sister, Lucille Smith.
Mr. White is survived by his wife of 65 years, Helen Baker White of Tullahoma; son, Jim White and his wife, Carol, of Nashville; daughter, Margaret McMullan and her husband, Alan, of Auburn, AL; sister, Margaret White of Bedford, TX and five grandchildren, Betsy White Costley and her husband, Mitch, of Atlanta; James Scott White of Oxford, OH; Scott Jordan and his wife, Jessie, of Atlanta; Kyle Jordan of Auburn, AL and Meredith Jordan of Cullman, AL.
The White family expresses its appreciation to the staff of Morning Pointe of Tullahoma.
Online condolences may be made at www.davesculbertsonfuneralhome.com
Daves-Culbertson Funeral Home is in charge of arrangements.

That's all for now.

We look forward to hearing the recording of the memorial service in Tullahoma Tennessee.
I'm sure it will be wonderful.