I thought it might happen someday, but I didn't know it would be now.

It turns out that the mammoth music industry folks have been clamping down on musicians everywhere, so that composers get their 'due'.
I understand that.

Well, now the music folks are going to restaurants, clubs, etc., and seeing if music is being performed - or just listened to on speakers - legally.

And they (three people (from BMI) at different times) have come to LoneStar Antiques to see if the piano player was playing tunes illegally. Fortunately I don't think anyone was playing the piano at the time each came in. I just play on Fridays and Saturdays now, and a new young man plays some other days.
If we are found to be playing tunes that are not public domain the antique mall will have to pay a big fine. OR to get an expensive license for us to play.
The BMI folks talked to Ronnie, our dear owner and manager, and told him of the new insistence of every big venue complying with (like) royalty dues.

Ronnie talked to me this past Friday and broke it to me.
Frankly I knew it might happen someday.
And really it is only fair to the songwriters and producers.

But oh, I am going to miss playing "Some Enchanted Evening" - and PHANTOM OF THE OPERA songs - as well as "Please Release Me, Let Me Go", and my dad's favorite "San Antonio Rose" and my mom's favorite "Lara's Theme'" from DOCTOR ZHIVAGO.
And "Over the Rainbow".. etc., etc., etc. 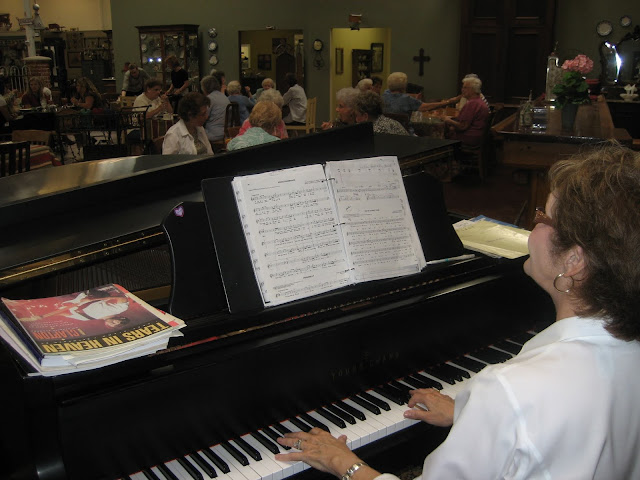 Yeah, I am kind of grieving.
Ah, but I will be okay, as long as folks like "On Top of Old Smokey". I bet I can come up with different variations of that - OR NOT.
(I'll let you know what I do soon - after playing Christmas carols.)

You can click HERE for an article about a restaurant in North Carolina that had to pay big time for playing 4 songs. Of course the story has two sides, and songwriters DO need to get their due, but what that restaurant had to pay was astronomical.

I will be able to play some classical pieces, of course, but most of my customers like either country tunes or songs from musicals.

Ah, but I can play "On Top of Old Smokey," and "In the Shade of the Old Apple Tree."  Those are public domain. Whether they'll bring the public in is another question.

So there you have it.

Oh, I meant to tell you that the musical giants are making sure BIG venues are paying their dues. Little ones don't have to, I don't think. (Like living rooms - or shower stalls!)  (LoneAntiques is 60,000 square feet.)

Stay tuned for how I make my tunes, okay?

Wow, that will be challenging though I'm sure you'll find some good ones.